Anti-corruption protests that have been peacefully going on for 40 days reached a climax in Bulgaria when demonstrators trapped a hundred ministers, lawmakers and journalists inside the parliament for over eight hours, urging the government to resign.


Police with shields formed a pathway through hundreds of Bulgarians to finally get all those trapped out of the building, pushing away the anti-government demonstrators. High-ranking officials were escorted outside in the capital, Sofia, at around 3am in police vans.

Anti-government protests escalated on Tuesday evening when several hundred demonstrators trapped the deputies and ministers inside Parliament hoping to oust the left-leaning government.

A total of 109 people - including three ministers, some 30 MPs, journalists and parliamentary staff were trapped inside the building, according to national television.

When a bus arrived at the site to escort the officials out, the demonstrators formed a human chain and threw bottles and stones at the bus, refusing to let the vehicle leave.

They shouted "Murderers!", "Mafia!", "Resign!" as dozens of police in riot gear pushed and clubbed them to clear a path for the bus. The people hurt included some with head injuries. 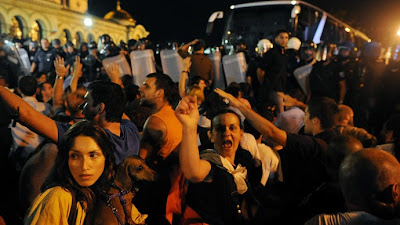 "We will try to find those who threw stones at police and deputies," he added.

President Rosen Plevneliev earlier issued a statement calling upon the protesters to keep the rally "peaceful and civilized."

"For the first time since the start of the protests we have now witnessed tension and attempts for provocation," Plevneliev said, urging for "calm and order."

Parliamentary Speaker Mihail Mikov suggested canceling Wednesday's planned parliamentary session, saying the deputies should not turn up for work until order was restored.

A member of the European parliament and former foreign minister, Ivailo Kalfin, wrote on Facebook: "With apologies to the millions who voted two months ago, we need new elections."

The Socialist-backed government took office after snap election in May, following the resignation of the previous cabinet provoked by anti-austerity protests.

The appointment of controversial media mogul Delyan Peevski as head of the national security agency initially sparked public outrage, with daily protests going on since June 14. Although the appointment was instantly revoked, demonstrators argued that the government is corrupt and must resign.

Recent public-opinion polls show they are supported by about two-thirds of Bulgaria's 7.3 million people, who have the lowest incomes in the European Union.