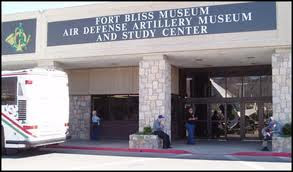 Public Urged Not To Panic As Army Battle Radiation Leak


30 people are undergoing testing for radiation poisoning after a leak was discovered at Fort Bliss Texas. an above ground bunker used to store weaponry has been found to contain both alpha and beta particles and there is concern that solidiers using the weapons may have been exposed to low level radiation.

The bunker in question was at one point coated in epoxy paint to contain the radiation but it has been admitted that over the years the coating has chipped off the building and this has potentially allowed the radiation to seep through the brickwork. Contact with the epoxy chippings could also be dangerous according to experts at Fort Bliss.

“It has come to our attention that the Air Force stored radioactive material during the 1950s and 1960s at a remote limited access building,” Maj. Joe Buccino, the public affairs officer at Fort Bloss, told KFOX TV.

An assessment conducted by post experts showed that “there is some low level of contamination that could be transferred to personnel.”(source)

With thousands of military personnel living and working at Fort Bliss and with the town of El Paso just a mile or so up the road isolating the  bunker and finding the buried material is a matter of urgency.

“We don’t know the scope of the issue, we don’t know, again, if it’s nothing or fairly substantial,”Mark Cauthers, Fort Bliss deputy garrison commander said…”it is important that we be guided by facts and not fear,” he added. (source)

Fort Bliss has a population of over 40,000 military and civilian employees. Rep.Pete Gallego of the House Armed Services Commission is urging the public to remain calm saying:
“It is important that we be guided by facts and not fear,” he said. “The safety and well-being of our servicemen and women is the top priority.”