"We cannot accept this kind of behaviour between partners and allies," Hollande told journalists during a visit to the western city of Lorient. "We ask that this immediately stop."

Hollande said "enough elements have already been gathered for us to ask for explanations" from Washington about the spying allegations.

"There can be no negotiations or transactions in all areas until we have obtained these guarantees, for France but also for all of the European Union, for all partners of the United States," Hollande told journalists.

It was an apparent reference to sensitive trade talks which are set to start between the US and the EU on creating the world's largest free trade zone.

"We know well that there are systems that have to be checked, especially to fight terrorism, but I don't think that it is in our embassies or in the European Union that this threat exists," he said.

French Minister of Foreign Trade Nicole Bricq said the upcoming talks on the new trade zone, due to begin next week, could be jeopardised. 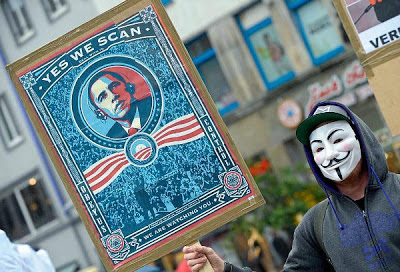 "This is a topic that could affect relations between Europe and the United States," she told AFP.

"We must absolutely re-establish confidence... it will be difficult to conduct these extremely important negotiations," she said.

Hollande said he had asked Foreign Minister Laurent Fabius to get in touch with US Secretary of State John Kerry immediately "to get all the explanations and all the information."

German news weekly Der Spiegel reported that the US National Security Agency (NSA) carried out covert surveillance on EU diplomatic missions, basing its report on confidential documents, some of which it had been able to consult via fugitive US leaker Edward Snowden.

The European Union, Paris and Berlin have angrily demanded answers over the allegations.

The government is listening to your internets. Generate a sentence with some of the keywords they're looking for. Tweet or share and you could earn a new follower in Washington.