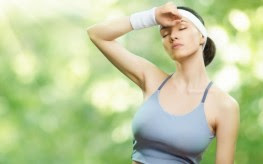 Sweating is both a sign of good health and an indicator of stress.


It can be worn like a badge of honor after a workout or a badge of shame when you’re feeling the pressure of a job interview. It’s wet, salty, sometimes stinks, and can’t be avoided, but it does serve several purposes.

So here are some little-known facts about sweat that might just make you appreciate it a little more.


1. Not All Sweat Stinks - There is actually more than one type of sweat. Stinky sweat is the kind produced by glands called apocrine glands, located in areas where there is more hair like your underarms and groin. This is the sweat produced when you are under stress, not the kind associated with a good workout. The stink associated with “body odor” and sometimes sweat is actually the result of bacteria breaking it down once it’s released from the apocrine glands and onto your skin.

2. Women Have more Sweat Glands than Men – Yeah, women typically have more sweat glands, but men sweat more. In general, we all have around two to four million sweat glands, with some individuals being naturally sweatier than others. As a matter of fact, about 3% of the population suffers from hyperhidrosis or excessive sweating.

3. Eating can Make You Sweaty - When you eat, your metabolism naturally increases. This boosts your body temperature and causes you to sweat in order to cool down. Interestingly, foods like hot peppers, which contain capsaicin, are known to both boost metabolism and make you hot.

4. Sweat Glands are most Concentrated on the Bottoms of our Feet - The lowest concentration of sweat glands is on your back, while the most sweat glands are on the bottoms of your feet.

5. Vegetarians Sweat Just Smells Good - No this isn’t a ploy to get you to go vegetarian (but, if it works, so be it). A Czech study looked at how women perceive body odor, comparing the odors of vegetarians to those of meat eaters. Overall, the women found vegetarians to have “significantly more attractive, more pleasant, and less intense” odors.

And finally, if you don’t already know it: sweating is good for you. Sweat can actually help the body detox heavy metals as well as fight infection and illness. So, if you aren’t getting your daily sweat on, now is a great time to start.