US Air Force Transports 24 Tons of Cocaine to Miami 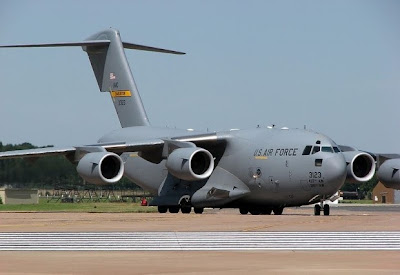 The US Air Force recently airlifted nearly 24 tons of cocaine from Costa Rica to Miami, the cocaine capital of the world, in a program described as being “shrouded in secrecy”.


According to the Costa Rica Star, a Boeing C-17 Globemaster III out of Dover Air Force Base landed at the Daniel Oduber Quiros International Airport (LIR) on Saturday July 27, loaded almost 24 tons of cocaine in pallets and then set off for its ultimate destination of Miami, but not before stopping in Nicaragua and Honduras.
The US Air Force agreed to transport the cocaine after a successful Costa Rican program that was destroying 300 kilos of the drug an hour had to be suspended because of a broken incinerator.

Following the airlift, Costa Rica’s Organization of Judicial Investigations said they would no longer authorize the transportation of cocaine to Miami and would go back to stockpiling the drug in secure warehouses.

The report cites another newspaper article which detailed how, “two magistrates at the Judicial Branch were in the dark about the U.S. Air Force arriving in Costa Rica to pick up a massive amount of cocaine,” noting that no proof of permission for the US aircraft to enter Costa Rican airspace was ever seen by legislators at the Costa Rican National Assembly. The exact identity of the Globemaster was also kept secret until further enquiry revealed it to be the “Spirit of Delaware.”

When the plane arrived, the Costa Rican consulate in Miami was supposed to confirm the delivery and destruction of the cocaine, but no such advisory has been forthcoming, although the Organization of Judicial Investigations claims the drugs were destroyed.