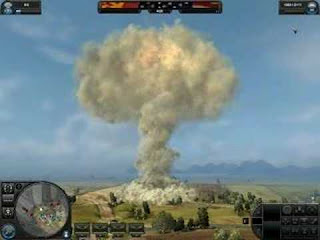 “Israel, unable to field credible conventional forces, is attempting to destroy the fighting ability of the Syrian Army through attrition, not simply “shock and awe,” but nuclear, chemical and even biological weapons.”
—
Experts on arms control policy, confirmed by multiple independent sources, indicate that Syria has been hit, in recent days, by at least four tactical nuclear weapons.

In addition, a Syrian Army brigade suffered massive casualties from a Sarin gas attack.
Not only are these attacks pushing the world to the brink of war but they coincide with a threat against America “from within,” Pentagon, DHS, AIPAC, drug cartels and key leaders of extremist GOP and Tea Party factions.

There is no “Al Qaeda threat,” the whole thing is a deception and cover, which has allowed President Obama to put in place needed defenses against a coup that was only days away.


WMD Use in Syria

The chemical weapons were traced to the Republic of Georgia and delivered to Israeli-led Al Qaeda forces inside Syria by units of the Turkish Army.
Israel, unable to field credible conventional forces, is attempting to destroy the fighting ability of the Syrian Army through attrition, not simply “shock and awe,” but nuclear, chemical and even biological weapons.

Last week, IDF Military Intelligence told their American counterparts that Russia had delivered eight nuclear weapons to Syria as a deterrent to further WMD attacks by Israel.
The US contacted Russia though official diplomatic channels. Russia, when asked, denied transferring nuclear weapons to Syria but indicated it had “special weapons” in theatre, with naval and air forces, if their “vital interests” were threatened.

Israel then reached out to Saudi Arabia, asking them to promise Russia a payment in excess of $1 trillion to abandon both their interests in Syria and to work to isolate Iran.
Russia was told they would receive their payment when they introduced a resolution to the Security Council to enact a “no fly zone” over Syria. Israel and Saudi Arabia received assurances that China would not exercise her veto at the Security Council if Russia either introduced or supported the measure.

There has been no leak from Kremlin sources as to the position President Putin will take.

The visit to Israel by General Martin Dempsey, Chairman of the Joint Chiefs of Staff, is an effort on behalf of the Obama administration to curtail what sane voices in Washington see as an attempt to begin a nuclear conflict that would inexorably engulf the planet.

President Obama canceled his scheduled meeting with President Putin in Moscow, not over issues of political asylum for Edward Snowden as reported in the press.
President Obama is facing a powerful domestic threat, reports of a possible military coup. He will not leave the capitol and has sent those he sees as leaders of that effort to bring down the government, Senators McCain and Graham, to Egypt on a “fishing expedition.”

In Egypt, McCain’s crass remarks and unconsidered comments, directly contradicting not just Secretary of State Kerry but angering the Egyptian government, may well undermine McCain’s influence with extremist elements planning to overthrow the US government.
“Songbird” McCain may well have plotted his last.


On the Ground in Syria

Today, a car bomb killed 18 outside Damascus. Al Nusra, the Al Qaeda affiliate trying to topple the governments of Iraq and Syria is credited. However, all intelligence estimates now clearly recognize that Al Nusra is, increasingly, Israeli controlled, particularly after bouts of infighting between factions fighting the government of Syria.

Russia spoke out against this attack, citing foreign-backed militants trying to “burn Syria to the ground” in revenge for the lack of support the Syrian people have given toward “regime change.”

What Russia hasn’t done is speak out against far more serious attacks on Syria, the use of tactical nuclear weapons by Israel, some believed to be launched from above Golan or Lebanon, some from inside Turkey or from submarines off Syria’s coast.
Russia’s lack of a reality-based policy on Syria is as responsible for the current state of affairs as Israeli hubris.

Israel is desperate, under pressure by the US to come up with a peace plan with the Palestinians who, themselves, now “smell blood” and are unwilling to settle for a smile, handshake and knife in the back as they had before.

Israel’s use of nuclear weapons against Syria is far from a demonstration of power, it is a sign of, not just weakness but collapse. Israel is so “forgotten” even the weekly holocaust hand wringing marathons are going unnoticed.

The whole idea behind the victimization hysteria that constitutes the social fabric of Israel is failing.

In early May, Israel lost a Dolphin submarine to a Russian built homing torpedo dropped from a Syrian helicopter. Approximately 48 hours later, Israel hit a Syrian command center with a tactical nuclear weapon.
Video of the attack, when examined by nuclear weapons experts, led to one conclusion. This was a nuclear weapon.

Since then, Israel has lost one F16 with two crewmembers to their S300 air defense system. However, sources indicate that the US, prior to Bush (43) leaving office, had supplied, not only latest variants of Generation III and IV tactical nuclear weapons, yields as low as 10 tons of TNT, some with no residual radiation whatsoever.
This has allowed Israel to attack Syria’s “soft targets” using terrain following missiles that can avoid the S300 radars, which are stretched thin.

Israel has been applying a “full court press,” using every intelligence asset available to defeat the S300 system through tracking the mobile radar and launch systems.
However, based on very limited conventional striking power, Israel has only its newfound mini-nukes, Sarin gas and unconfirmed use of bio-toxins to lash out with.
Official sources concurred and in an interview with Colonel Jim Hanke, former Defense Attaché to Israel, it was revealed that Israel has long prepared for such attacks on Syria, even to the point of carefully mapping target sites in reference to fault lines that lead into Israel.
Were a nuclear weapon or massive penetrator/bunker-buster to be used carelessly, it could spread massive earthquakes across Israel.

On August 1, 2013, Israel attacked what they called a “large weapons cache” outside Homs.
In many ways, the attack resembled the Qasyoon mountain attack in early May, an attack that was confirmed to be nuclear, a full mushroom cloud with requisite “ball lightning.”
The Homs explosion was said to be both a fuel depot and arms cache. What was observed, however, was a telltale mushroom cloud, a massive shockwave and an explosion that no munitions expert would ever consider a “secondary blast.”

From an August 5, 2013 article by Jon Snow, posted on the UK Channel 4 blog:
“But the two explosions in Homs and Qasyoon share the same property:
They are both above ground airbursts according to Greg Thielmann, an expert on arms control policy whom I spoke with on Saturday at great length. I was first alerted to the connection by slow twitter chatter right after the bombing in Homs.

Needless to say I was shocked at what he told me next:
‘The fact of the matter is, what we are seeing in both these cases is a tactical nuclear strike, probably by cruise missiles launched from aircrafts near the borders of Syria or right off the coast in the Mediterranean.’

But sure, Greg, wouldn’t this mean a nuclear holocaust? Not so he says. ‘Tactical nuclear weapons lower the threshold on use of a nuclear bomb as their modern incarnation can be tuned in yield in order to target military sites using standoff weapons without escalating by destroy surrounding civilian infrastructure.’”

Snow’s source, highly credible and knowledgeable, indicated that Israel stood ready to deploy its arsenal of five-megaton thermonuclear weapons against Syria’s cities.
Israel believes they are immune to retaliation.

Toward that end, Israel has instructed India to begin border clashes with Pakistan and to put its nuclear forces on high alert.
Only Pakistan could meet an Israeli attack with an overwhelming nuclear response. It is India’s job to tie Pakistan’s hands.

Every base has been covered, the US threatened with coup, the EU financially destroyed, Russia facing an uncertain United States and the chance for a huge financial payday.
People have heard about game theory warfare but few knew the real risks.