Buddha's are here to stay. 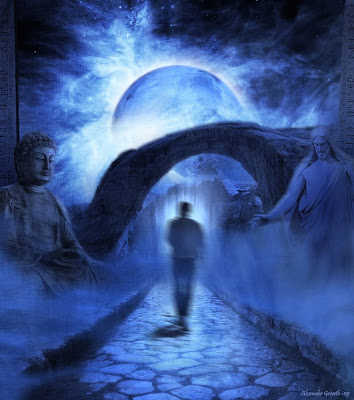 In our recent history, some people went through the cycle of life's lessons, expierencing & understanding of who they were and what their relation to the world & cosmos was all about.


And some actually figured it out.
We all know their names.

Just before gautama Buddha died, his students asked him: "What should we do without you?"
Buddha's answer was: "Be your own light."

The other Guy told us: "You can do even greater things than me."    and:
"Act to an other person as if you are doing it to yourself."
[I still can't recite a biblephrase properly but hopefully I'm close]

That seems to be the far away, somewhere else, someday, another place, maybe tomorrow fairytale.

Searching for that level of consciousness in a location far away, maybe in the future....

It's neither far away or in a near future. It's here & now.

Who or what exactly were you waiting for all the time? The savior you've searched for of all the time....was yourself.. You are your own knight in shining armor.  There is only one you. Being the center of your life. No one else outside you is coming to save you.     ever
You waited for yourself to resque you.

The Karmarule is that what we do to others is eventualy coming back to ourselves. Believe it or not. And that doesn't mean simply being 'nice' to other people is just ok. Doesn't work that way.

Nowadays a lot of people are expierencing this already. Not tomorrow in a weird place but now & here.
You don't hàve to believe in Karma but it works just fine all the time believe it or not.

Same as with 'the secret'.  Using it to gain something in your life.
The real secret is that you can't turn it on/off. You are constantly creating your life with your thoughts & intentions all the time, in coöperation with Karma.

I know.
You know it.
Sometimes we do silly things or worse than that to an other person, animal or a plant and it kicks us right  back in our face, or later at a point in time.
You feel that action-reaction pattern. Don't ignore these feelings then. They mean something for your life.

In psychology there is a name for people who run away from conflicts. Flight behavior?
Trying to escape what you created?
Are you a runner or a stayer?

They left. Should you stay or go?

The early Wiseguys who figured it all out, decided to leave this planet. Who wouldn't?
We all know that their choise of leaving didn't solve anything except that someone wrote something about them in what we now call holy books.
They were with few & often very alone and marked as Mystics. Most likely you feel the same sometimes,  but that comes with the job;-]

Something has changed. Then it was just a few leaving and instead of blaming these Earth leaving Buddha's, rather I'd say to thousands now: "thank you for staying".

Yes, nowadays there are thousands boddhisattvas on the planet.
Yea, wow.
Thousands Boddhisattvas are here to stay now.
They won't leave.
They've learned from our past.
They are here to stay
Leaving this planet enlightend as a Buddha is an easy thing for them. A bit too easy. Is that really all that was meditating for all these years? Probably not.
Staying here to help to enlighten the others is an other challenge.
Now, they all decided to stay.

You, came here for a reason
You, went through your life's lessons with pain & suffering.
You, the awakened one, now, finally. Take a deep breath.
You, Being the centre of your life spreading your energy.
You, have the choice to leave this planet as a Buddha to be free.
You, who can choose to stay to heal.
Yes, thousands worldwide now have made their choice already to stay & act in 'the circus' of life.

They drew a line in the sand, saying: enough=enough & I'm NOT leaving untill this fracking mess is healed. After making this statement realizing there are thousands  of you doing the same. You're not alone.
Healing it all. Together we're many.

Therefore becoming a Bodhisattva is a huge step in helping not only yourself, but also every other sentient being, both seen and unseen.
The Bodhisattva will undergo any type of suffering to help another sentient being, whether a tiny insect or a huge mammal.
In Shakyamuni Buddha's 'Perfection of Wisdom in 8,000 Lines' it states: "I will become a savior to all those beings, I will release them from all their sufferings."
If this sounds familiar to anyone not acquainted with Buddhism, then you only need to think of the example of Jesus Christ, a true Bodhisattva.

If we're staying,
All of us are going.
Looks like a plan?