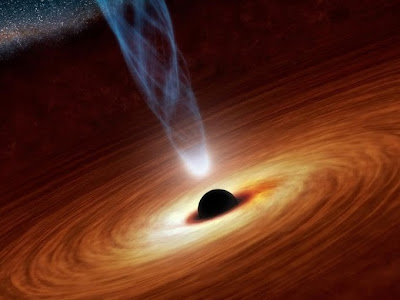 Supermassive black holes can be found in the center of galaxies, driving enormous forces that shape the space around them.


Now, astronomers have found a new way to measure the spin of these black holes, paving the way for a better understanding about how they drive the growth of galaxies.

Black holes lie at the centers of almost all galaxies. They can hurl out incredibly hot particles at high energies, preventing intergalactic gases from cooling and forming new stars in the outer galaxy. Currently, scientists aren't exactly sure why the jets are ejected into space, but this power could be linked to black hole spin. That's why understanding this motion could allow researchers to better understand how galaxies form.

In order to measure a black hole's spin, the astronomers examined one specific black hole. Possessing a mass that's about 10 million times that of our sun, this supermassive black hole is located at the center of a spiral galaxy about 500 million light years from Earth.

There, it feeds on a surrounding disk of material that fuels its growth and powers its activity. The astronomers observed optical-ultra-violet and soft x-rays that were created by heat as the black hole fed. Then then measured how far the disk was from the black hole.

After finding out what this distance was, the scientists could then determine exactly how fast it was spinning. A black hole that spins more quickly, for example, will pull the disk of material in closer to itself. In the end, the scientists were able to characterize the spin.

"Understanding this connection between stars in a galaxy and the growth of a black hole, and vice-versa, is the key to understanding how galaxies form throughout cosmic time," said Chris Done, the lead researcher, read more