How DNA Is Reprogrammed By Words and Frequencies 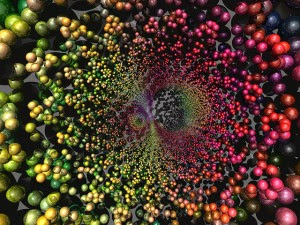 We now know that just as on the internet, our DNA can feed its proper data into a network of consciousness and can call up data from the network and also establish contact with other participants in the network.


In addition, there is evidence for a whole new type of medicine in which DNA can be influenced and reprogrammed by words and frequencies without cutting out and replacing single genes.

After thousands of years of being disconnected from higher dimensional frequencies, our DNA is finally breaking free from old patterns which have been stuck in a universal time matrix. However, humans will soon know and understand why 97% of our DNA has a higher purpose and why its transformation is leading us into an awakening that we never could have imagined.

The human genome is packed with at least four million gene switches that reside in bits of DNA that once were dismissed as “junk” but it turns out that so-called junk DNA plays critical roles in controlling how cells, organs and other tissues behave. The discovery, considered a major medical and scientific breakthrough, has enormous implications for human health and consciousness because many complex diseases appear to be caused by tiny changes in hundreds of gene switches.

As scientists delved into the “junk” — parts of the DNA that are not actual genes containing instructions for proteins — they discovered a complex system that controls genes. At least 80 percent of this DNA is active and needed. Another 15-17 percent has higher functions scientists are still decoding.

Russian researchers’ findings and conclusions are simply revolutionary! According to them, our DNA is not only responsible for the construction of our body but also serves as data storage and in communication. The Russian linguists found that the genetic code, especially in the apparently useless junk DNA follows the same rules as all our human languages. To this end they compared the rules of syntax (the way in which words are put together to form phrases and sentences), semantics (the study of meaning in language forms) and the basic rules of grammar. They found that the alkalines of our DNA follow a regular grammar and do have set rules just like our languages. So human languages did not appear coincidentally but are a reflection of our inherent DNA.

The Russian biophysicist and molecular biologist Pjotr Garjajev and his colleagues also explored the vibrational behavior of the DNA. The bottom line was: “Living chromosomes function just like solitonic/holographic computers using the endogenous DNA laser radiation.” This means that they managed for example to modulate certain frequency patterns onto a laser ray and with it influenced the DNA frequency and thus the genetic information itself. Since the basic structure of DNA-alkaline pairs and of language (as explained earlier) are of the same structure, no DNA decoding is necessary.

This finally and scientifically explains why affirmations, autogenous training, hypnosis and the like can have such strong effects on humans and their bodies. It is entirely normal and natural for our DNA to react to language. While western researchers cut single genes from the DNA strands and insert them elsewhere, the Russians enthusiastically worked on devices that can influence the cellular metabolism through suitable modulated radio and light frequencies and thus repair genetic defects.

Garjajev’s research group succeeded in proving that with this method chromosomes damaged by x-rays for example can be repaired. They even captured information patterns of a particular DNA and transmitted it onto another, thus reprogramming cells to another genome. So they successfully transformed, for example, frog embryos to salamander embryos simply by transmitting the DNA information patterns! This way the entire information was transmitted without any of the side effects or disharmonies encountered when cutting out and re-introducing single genes from the DNA. This represents an unbelievable, world-transforming revolution and sensation! All this by simply applying vibration and language instead of the archaic cutting-out procedure! This experiment points to the immense power of wave genetics, which obviously has a greater influence on the formation of organisms than the biochemical processes of alkaline sequences.

This discovery also points to the significance of sound frequencies and vibrations in the origin of human life and the possibility that creation was generated by waves of consciousness. The Phantom DNA effect is a case in point: the energy field of a DNA sample remains detectable by laser light even when the physical sample is removed. At a fundamental level, man is pure energy. In Wave Genetics, the junk DNA functions at a rich infrastructure level of super codes and wave communication, realized in material form as crystalline structures–dynamic gene-holograms in liquid crystals of the chromosome continuum. What this model suggests is that the human gene is part of larger holograms (multiverse) of wave information reality. Hyper-communication, in the form of remote sensing, remote healing and telepathy, is definitely a part of the human protocol.

Scientists are aware that 97% of our DNA is, as they call it “junk DNA”. They call it junk because they don’t see that we have any use for it. Only 3% of our DNA is wrapped up in the spiraling double helix strand. During the time of the 75,000 year cycle when we are exposed to the most torsion energy waves and it affects our DNA by reorganizing the 97% “junk” DNA from a 2-strand double helix to a 12-strand helix advancing man in a leap of evolution.

Empty space is not really empty but filled with the invisible torsion wave energy at different degrees of concentration. Thus, as the stars and planets drift through the galaxy they pass through different concentrations in very exact intervals of time, with precise cycles that can vary in length from thousands to millions of years. As planets move through periods of high concentration of these torsion waves a transformation affects the DNA structure on the planet, which causes more highly evolved forms to more rapidly replicate than less evolved forms of life. Ample evidence of this is seen to occur through our fossil records which evolution has shown this to occur in sudden jolts rather than as a gradual process. The effect has been named as “punctuated equilibrium” by mainstream biologists.

In nature, hyper communication has been successfully applied for millions of years. The organized flow of life in insect states proves this dramatically. Modern man knows it only on a much more subtle level as “intuition.” But we, too, can regain full use of it. An example from Nature: When a queen ant is spatially separated from her colony, building still continues fervently and according to plan. If the queen is killed, however, all work in the colony stops. No ant knows what to do. Apparently the queen sends the “building plans” also from far away via the group consciousness of her subjects. She can be as far away as she wants, as long as she is alive. In man hyper communication is most often encountered when one suddenly gains access to information that is outside one’s knowledge base. Such hyper communication is then experienced as inspiration or intuition. The Italian composer Giuseppe Tartini for instance dreamt one night that a devil sat at his bedside playing the violin. The next morning Tartini was able to note down the piece exactly from memory, he called it the Devil’s Trill Sonata.

For years, a 42-year old male nurse dreamt of a situation in which he was hooked up to a kind of knowledge CD-ROM. Verifiable knowledge from all imaginable fields was then transmitted to him that he was able to recall in the morning. There was such a flood of information that it seemed a whole encyclopedia was transmitted at night. The majority of facts were outside his personal knowledge base and reached technical details about which he knew absolutely nothing.

When hyper communication occurs, one can observe in the DNA as well as in the human being special phenomena. The Russian scientists irradiated DNA samples with laser light. On screen a typical wave pattern was formed. When they removed the DNA sample, the wave pattern did not disappear, it remained. Many control experiments showed that the pattern still came from the removed sample, whose energy field apparently remained by itself. This effect is now called phantom DNA effect. It is surmised that energy from outside of space and time still flows through the activated wormholes after the DNA was removed. The side effect encountered most often in hyper communication also in human beings are inexplicable electromagnetic fields in the vicinity of the persons concerned. Electronic devices like CD players and the like can be irritated and cease to function for hours. When the electromagnetic field slowly dissipates, the devices function normally again. Many healers and psychics know this effect from their work. The better the atmosphere and the energy, the more frustrating it is that the recording device stops functioning and recording exactly at that moment. And repeated switching on and off after the session does not restore function yet, but next morning all is back to normal. Perhaps this is reassuring to read for many, as it has nothing to do with them being technically inept, it means they are good at hyper communication.

In their book “Vernetzte Intelligenz” (Networked Intelligence), Grazyna Fosar and Franz Bludorf explain these connections precisely and clearly. The authors also quote sources presuming that in earlier times humanity had been, just like the animals, very strongly connected to the group consciousness and acted as a group. To develop and experience individuality we humans however had to forget hyper communication almost completely. Now that we are fairly stable in our individual consciousness, we can create a new form of group consciousness, namely one, in which we attain access to all information via our DNA without being forced or remotely controlled about what to do with that information. We now know that just as on the internet our DNA can feed its proper data into the network, can call up data from the network and can establish contact with other participants in the network. Remote healing, telepathy or “remote sensing” about the state of relatives etc.. can thus be explained. Some animals know also from afar when their owners plan to return home. That can be freshly interpreted and explained via the concepts of group consciousness and hyper communication. Any collective consciousness cannot be sensibly used over any period of time without a distinctive individuality. Otherwise we would revert to a primitive herd instinct that is easily manipulated.

Hyper communication in the new millennium means something quite different: Researchers think that if humans with full individuality would regain group consciousness, they would have a god-like power to create, alter and shape things on Earth! AND humanity is collectively moving toward such a group consciousness of the new kind. Fifty percent of today’s children will be problem children as soon as the go to school. The system lumps everyone together and demands adjustment. But the individuality of today’s children is so strong that that they refuse this adjustment and giving up their idiosyncrasies in the most diverse ways.

The Universe has no restrictions. We create the boundaries based on our beliefs. These boundaries limit our spiritual growth / inner development which affect our DNA and vice-versa.

We have finally entered a portal where we can express our full potential as creative beings and begin the gradual removal of our preexisting human templates that have only been useful in the old world. The new world filled with higher consciousness and frequencies will only allow those vibrational alignments within our highest good. Anything else will be cast aside and force us to adapt until we get it right. This is the new portal that will intensify every month.

Get ready to create a new you every single day.