How to Boycott Wall Street 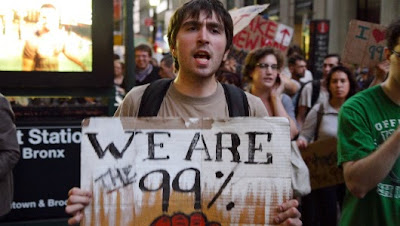 The politicians, the media, the financiers and the other supporters of the status quo are not particularly threatened by mass political movements, marches on Washington, or demands for government to do something about the situation.


But what they do live in mortal fear of is that people will start taking the matters into their own hands and doing the only thing that it is within our direct and immediate power to do: to withdraw our money from the financial web that they have spun around us.

One of the most startling examples came at the height of the Move Your Money campaign in October 2011 when a St. Louis Police Department SWAT team was called in to barricade the doors of a Bank of America branch to physically stop a group of protesters from withdrawing their money from the bank.

The point of the boycott, of course, is not merely to starve the Wall Street fat cats, but to use our money to build up a viable alternative infrastructure.

The road from here to one in which there is a viable, healthy alternative financial infrastructure that the majority of the population will feel secure in supporting is a long and arduous one, to be sure, but there is a bright side: the revolution does not have to start in the streets of Manhattan or in London or Tokyo or other financial center. This revolution begins at home, it begins with us, and, if you so choose, it begins today. read more
hear more


The SECRET War on Truth & Whistleblowers: