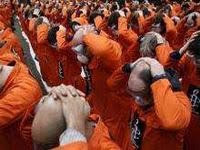 Washington and London have issued alerts about impending attacks on their embassies and nationals around the world.


Well, well, surprise, surprise. While no balanced and informed individual can condone terrorist attacks, is this not just a natural consequence of a spitting-in-the-wind, "eff off" foreign policy?

One of the visual memories I have of Thatcher's Britain, as a visitor in the 1980s, was that of shirtless, skin-headed, tattooed yobs driving around in vans with the doors wide open, sticking up the middle finger and bawling "F... Off!" at any passer-by. One of the visual memories we have of David Cameron's United Kingdom today is Home Office (Interior Ministry) vans being driven around by government-employed motorists, sporting a huge outdoor poster on the back with a message aimed at immigrants, saying "Go Home or face arrest".

This "F... Off! and Go Home" approach, evidently an endemic constant vector in the equation which composes modern Britain, is, not surprisingly, a part of its foreign policy, which since Thatcher's time has become progressively worse - more imperialistic, more atavistic, more about deployment of troops, less about development to manage crisis or foster growth.

It comes as no surprise, therefore, to discover that behind this approach is NATO, today an offensive terrorist organization which sponsors state terrorist attacks against civilians and civilian targets in defenceless countries with resources or strategic importance to obtain these. Increasingly, the spearhead of NATO is the FUKUS Axis (comprised by France, the UK and the US), two former imperialist masters and their current dominus, the former rogue colony which sided with France against King George.

And the killing-tip of the arrow being Washington, it also comes as no surprise that the mastermind behind NATO and the senior FUKUS Axis member today claims the title of most hated nation on Earth, its FUKUS Axis poodles taking silver and bronze medals and the other NATO members, also-rans.

Nearing the truth as to what is behind this "F... Off!" foreign policy, we see that what controls Washington is not its President but rather, the lobbies which close ranks behind a President they did not elect or which place in power a President they did, a win-win situation in which the lobbies, supra-national untouchable mega-corporations, sponsor policies which further their interests and feather the nests of those who lead them.

The weapons lobby, the banking lobby, the pharmaceutical lobby, the energy lobby, the four aces in the demonic pack of cards, are the ones controlling the foreign policy of the United States of America, the United Kingdom and France, no matter how well-meaning their political leaders may or may not be, no matter how much wool the sham of democratic institutions has pulled over the eyes of their citizens, duped by sinister manipulation of the truth by a bought corporate media and doped by mechanisms which massify banality and stupidity (soccer and reality shows on TV).

However, on their inexorable march onward, like the veritable Christian soldiers marching off to war against the Infidel, murdering men, women and children alike, more like Satanic hordes than Men of God, the corporations and their minions have forgotten a fundamental law of physics: when you spit into and against the wind, it hits you square in the face. Now let us ask why Russia's embassies are not closed or why terrorist threats are not an endemic part of life on the Isle of Tonga. Because they mind their own business? And if terrorism does occur in the Russian Federation, is it not because Wahhabist fundraisers are at work in terrorist states in the Gulf? So the big picture these days is the lobbies, whose foot-soldiers are NATO and whose general command is the FUKUS Axis, centred on Washington using proxies to conduct their policies, funding and harbouring terrorists on their own lists of proscribed groups, using these to destabilize sovereign states. It is illegal, under international law.

This is not an ethical foreign policy, it is a spit-in-the-wind, "eff off!", holier-than-thou, top-down, arrogant, belligerent and chauvinistic, demonic foreign policy. But as physics teaches us also, to every action, there is a reaction. This weekend's fearful measures by Washington and top lapdog London are a consequence of what actions have been taken and are the epitome of the saying "you reap what you sow".

While no balanced and instructed human being can or should gain any pleasure out of terrorist acts or threats and while the death of every human being is a tragedy, whoever it is, whatever religion, race or creed, and wherever they are from, the state of today's world is largely the responsibility of the imperialist acts of yesterday and their replica today by the very same trio, the FUKUS Axis. How much misery was caused by raping countries and looting their resources, slaughtering their societies, ("Shoot when you see the whites of their eyes, the savages!" "Kill the natives, eh what?") and how much of what these countries did, and do, is reported in the mass media?

Practically none of it. They preach about how they spread freedom and democracy when their own political systems are rotten to the core and far from democratic, they label and name-call others in a fashion which is as hypocritical as it is slanderous. Russia stands for respect for international law, NATO stands for breach of law and perpetration of war crimes.

NATO, Abu Ghraib torture camp, torture of detainees, detaining persons without due legal process and the appalling human rights abuses on the Isle of Cuba, namely at the Guantanamo Bay torture and concentration camp, run by Washington, are all synonymous. Welcome to spit-in-the-wind foreign policy.

The readers of this piece are not being treated like idiots - they know where the truth lies, and it certainly does not lie with the British Bullshit Corporation (BBC) or Sky "do you like David Beckham?" News.


Related:
Washington Is Driving The World To The Final War
Unmasking the embassy threat