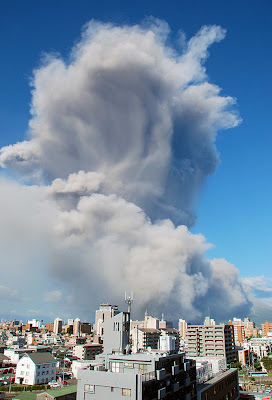 Sakurajima, one of the world’s most active volcanoes, has covered the city of Kagoshima in southern Japan in ash and spewed a record-high cloud of smoke 5 kilometers into the sky.


The smoke plume was the highest since 2006, when meteorologists began storing data on smoke during eruptions from the volcano.

Sunday’s eruption was the largest at Sakurajima in decades, but the 500th recorded this year, according to Wired.com.

Lava flowed 1 kilometer from the volcano, but no injuries or damage were reported.

People living in Kagoshima, a city of 600,000 people 10 kilometers from the volcano, wore masks and raincoats, and took umbrellas to protect themselves from the hazardous ash.