The U.S. military has been investigating the use of sophisticated data mining tools to probe social media and other open sources in order to support military operations against money laundering, drug trafficking, terrorism and other threats.


But the window for doing so may be closing as the social media landscape changes, according to an internal assessment.

U.S. Special Operations Command (SOCOM) National Capital Region (NCR) conducted a series of experiments over the past year under the rubric “QUANTUM LEAP” that was intended to test “non-traditional” tools and techniques to advance the SOCOM mission.

An after-action report on the first experiment said it “was successful in identifying strategies and techniques for exploiting open sources of information, particularly social media, in support of a counter threat finance mission.”  Counter threat finance refers to efforts to disrupt an adversary’s finances.  A copy of the SOCOM NCR report was obtained by Secrecy News.  See “Project QUANTUM LEAP: After Action Report,” 12 September 2012. 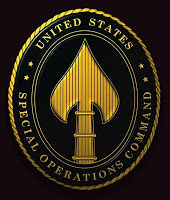 “Major lessons learned were the pronounced utility of social media in exploiting human networks, including networks in which individual members actively seek to limit their exposure to the internet and social media…,” the report said.

The QUANTUM LEAP project, which did not utilize classified intelligence, relied heavily on participation by private sector firms identified in the report, who demonstrated tools they had developed “to enhance the ability to discover relationships, human networks, and geospatial features” from open source data.

A tool called Social Bubble permitted the search of Twitter-related content “to explore human networks associated with the [counter threat finance] scenario and enabled identification of various entities… associated with the moneylaundering network.”  A tool called Recon was used to reconstruct source documents from a raw data stream.  Another tool served to “collect large quantities of data from the ‘deep web’, or sources which are accessible via the internet but not necessarily indexed or linked via a world wide web page.”  And another called Semantica “is capable of ingesting structured and semi-structured data and displaying it in a ‘triplet’ format, e.g. two entities and a relationship, such as [A is owned by B].”

The report said that as valuable as the opportunity created by new techniques for data mining of open sources appears to be, it may prove to be transient. read more