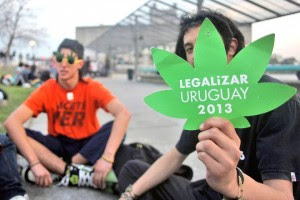 
Votes were cast after a 13 hour debate on the subject. The vote was passed in the lower house of congress, the measure now goes to the Senate where a passing of the bill is expected to make Uruguay the very first country in the world to licence and enforce rules for the production, distribution and sale of marijuana. Many members of congress believe that displacing illegal dealers through licensed marijuana sales could save money as well as lives. Marijuana has been legal to use in Uruguay for quite sometime, however it’s illegal to sell it, buy it or produce it. But that is looking like it will all be a thing of the past.

Under the new legislation, Uruguay’s government would license growers, consumers and sellers as well as keep an updated registry to ensure people do not buy more than 40 grams a month. Licensed consumers will be allowed to grow up to six plants at a time in their home and regulations will be set to allow large scale farming of the plant. There are even talks of an institute for regulation and control of cannabis. This body would be given the authority to grant licenses for all aspects of a legal industry to produce marijuana for recreational, medicinal or industrial use.

Opponents of the proposal argued that marijuana use leads to harder drugs and bad habits. The only problem with this claim is that there is no evidence to support it. In fact, there are a number of studies that show how active ingredients within marijuana could in fact be beneficial to human health. Not to long ago, a study was published that illustrated how cannabinoids improve the efficiency of mitochondria and remove damaged brain cells. The study was published in Philosophical Transactions of The Royal Society B.  A multitude of studies have been published about the potential benefits of Cannabinoids.

If you were unaware of these studies, hopefully it inspires you to investigate the available evidence to support the health benefits of cannabinoids. Many would be surprised to find out that many of the benefits come when eating the plant raw and not from smoking it.
Marijuana is known to have many medicinal properties. These medicinal properties are a threat to many pharmaceutical drugs, perhaps that’s one reason (out of many) marijuana is currently illegal in many parts of the world.

Doctors who have been researching cannabis and it’s benefits in diet for have recommended that people make cannabis a part of their everyday diet. To reiterate, the plant does not need to contain high levels of THC and it can simply be eaten. Smoking it does not give the same therapeutic results as eating or juicing the plant. If we view the plant simple as a vegetable like all other vegetables we eat, it makes sense that we wouldn’t be smoking it to get the nutritional benefit. However, smoking Cannabis has shown other benefits and can be a positive experience for those looking to explore their consciousness a little further.

It’s important to look at both sides of the coin when dealing with this plant. Most “experts” who believe that marijuana is harmful to human health are usually the ones who are unable to site specific sources and studies to back up their belief. There is very little scientific evidence to back up the reported negative effects of marijuana. On the other hand, there is an enormous amount of scientific evidence to back up the reported medicinal qualities of marijuana, and the health benefits that cannabinoids offer.

Email ThisBlogThis!Share to TwitterShare to FacebookShare to Pinterest
Labels: cannabis