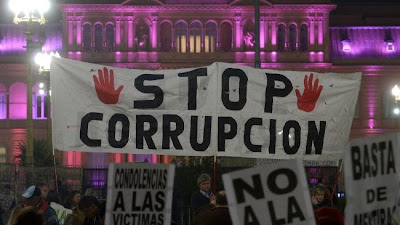 Thousands of Argentineans have taken to the streets in the capital to protest against rising inflation and corruption, ahead of key legislative elections Press TV reports.


Anti-government protesters gathered on Thursday at the national monument Obelisk in Buenos Aires and marched to the Plaza de Mayo square located in front of the Casa Rosada government house.

“Corruption kills because we have less hospital and less security and weaker education, it kills because we are leaving our children defenseless. Everything these people are taking away should be used to develop our country,” said one protester.

In addition, they voiced anger at the alleged government attempts to control the judiciary system and to reform the constitution to facilitate the re-election of President Cristina Fernandez de Kirchner.

The rally was the second anti-government protest in four months and it was held days ahead of PASO primaries, when Argentineans will decide which political parties and candidates are going to compete in October’s legislative elections.