Researchers have finally confirmed that ancient iron relics, which were unearthed in 1911 from two burial sites, are pieces of meteorites that were hammered carefully into thin sheets before being rolled into tubes.


The latest finding by researchers at the University College London, Qatar (UCL), proves that fourth century metalworkers could mould more brittle materials than copper, and that the artifacts were made from meteorites. Study here.

The ancient relics consisted of nine beads that were excavated from a pre dynastic cemetery located near the village of el-Gerzeh, 43 miles south of Cairo, northern Egypt. Strung together with precious gemstones such as gold, carnelian and other metals, the artifact that was unearthed from a tomb of a teen boy, dates back to 3200 B.C., nearly 2000 years before the onset of the Iron Age.

"The really exciting outcome of this research is that we were for the first time able to demonstrate conclusively that there are typical trace elements such as cobalt and germanium present in these beads, at levels that only occur in meteoritic iron," says Professor Thilo Rehren, the lead author of the study.

The researchers used X-rays to determine the exact nature of the materials in the artifacts.

"The shape of the beads was obtained by smithing and rolling, most likely involving multiple cycles of hammering and annealing, and not by the traditional stone-working techniques such as carving or drilling used for the other tubular beads from this tomb," Rehren said.

The finding was published in the journal Archaeological Science. 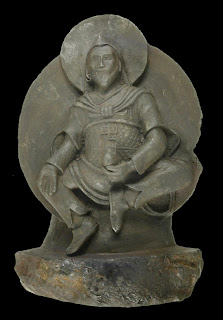 This is not the first time beads from this Egyptian tomb have been linked to the cosmos. Earlier this year, in May, researchers at the Open University and University of Manchester published a paper in the journal Meteoritics and Planetary Science about the celestial origins of the ancient beads.

Other researchers have identified different artifacts that also have space origins. Last year, German scientists discovered a Buddha statue that was carved from a meteorite between the eighth and 10th centuries.