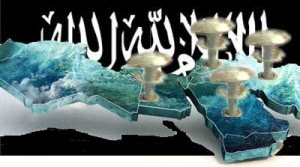 There is one thing certain about the publicized threat to our embassies; it is not what it is presented to be.


To accept the official explanation of a nebulous threat from al Qaeda as the reason for closing our embassies across the Middle East and North Africa is being dangerously naive and simplistic. This is much more serious than what we are being told, but not for the reasons we are being given.

We are seeing the consequences of a long running “Cold War” on two major fronts of political conflict that could escalate into military engagement with proxy nations of world super powers. The world, and life as we know it, could change in an instant should we awaken one morning to the news of bombs flying across the Middle East. That is a very real possibility, as we are now in a heightened proxy war environment. We are standing in a thick forest of dry tinder, and the smallest of sparks could ignite a conflagration the likes of which we have never before seen.


How we arrived here

“The farther back you can look, the farther forward you are likely to see.” This quote attributed to Winston Churchill is applicable to our current situation as it is a consequence of our policies and actions in the Middle East and north Africa.

First, it is important to understand that the so-called Arab Spring did not start on December 18, 2010 as a spontaneous revolutionary wave of demonstrations by people to rid themselves from the shackles of governmental oppression. It was planned many years ago by the globalist power brokers, with the latest incarnations perhaps sketched out in the bowels of a Saudi mansion or an estate owned by a cabal of central bankers, partly to change the geopolitical power structure of the Middle East, and partly as a “jobs program” for the military-industrial complex.

This was confirmed by a 1300 word e-mail dated June 8, 2008, sent by former British Ambassador to Libya Sir Vincent Fean to Tony Blair, just shy of a year after Blair stepped down as prime minister. The e-mail consisted of a briefing on the state of relations between Great Britain and Colonel Muammar Gaddafi in advance of a visit by Blair to see Gaddafi. His June 10, 2008 visit with Gaddafi would be one of six made by Blair after  leaving office and just three years before Gaddafi was deposed by the U.S. and UK led interests and ultimately murdered.

Exactly what was the purpose of this meeting as well as the others made by Tony Blair on behalf of the Crown? According to the confidential information obtained by The Telegraph, it was about a prisoner transfer agreement that would be signed once Libya agreed to purchase an air defense system to the tune of about £400 million. The prisoner? Lockerbie bomber Abdelbaset al-Megrahi. Who would provide the air defense system? MBDA, a missile developer and manufacturer with operations in the UK, France, Germany, Italy, Spain and the United States. They provide products and services for over 90 militaries worldwide. They are a world leader in missiles and missile systems, and employ about 10,000 people in France, the United Kingdom, Italy, Germany and the United States, and produced about 3,000 missiles and missile systems last year alone.

It is not merely the military-industrial jobs program alone, however. According to the confidential memo, a key objective of Great Britain was to force Libya to invest its £80? billion sovereign wealth fund through the City of London. Additionally, the Department for International Development was also eyeing another Libyan wealth fund worth £130 million “to pay for various schemes in Sierra Leone and other poverty-stricken countries.”

Concurrent with the machinations of the UK, former French minister for Foreign Affairs Roland Dumas shed additional light on plans relating to Libya and Syria in an interview with the French TV station LCP:

“I’m going to tell you something. I was in England two years before the violence in Syria on other business. I met with top British officials, who confessed to me that they were preparing something in Syria. This was in Britain not in America. Britain was organizing an invasion of rebels into Syria. They even asked me, although I was no longer minister for foreign affairs, if I would like to participate. Naturally, I refused, I said I’m French, that doesn’t interest me.” [emphasis by this author]

Dumas added: “The only thing I know [about French Leaders] is that they have gone crazy. President Sarkozy hosted Gaddafi a few months ago at the Élysée Palace, with a red carpet and all the grandiose honors. Two months later, Sarkozy is leading a crusader war, at the head of NATO, which has become a pawn serving international politics. This has been going on for a long time.” He further stated that “I regret to see my country, to which I belong with spirit, blood, and life, leading an instrument such as NATO to come and destroy an entire people and attack its leaders.” [emphasis by this author]

Due to the role of Mr. Dumas in the French government, he could not reveal France’s role in the British plan as he would be exposing himself to prosecution for revealing state secrets, thus explaining his statement “I’m French, that doesn’t interest me.”

It should be clear that the Arab Spring, including the NATO action taken against Gaddafi’s Libya followed by the rebels attacks against Assad, is part of a globalist agenda rather than a spontaneous uprising that has become the official historical narrative for the naive.

It was shortly after the September 11, 2012 attack in Benghazi that I wrote in explicit detail the actual reason for that attack. Thanks to a highly placed source in the intelligence venue, readers learned the truth ten months before the corporate media finally acknowledged that the compound in Benghazi was the operations center for a large CIA weapons smuggling operation where Libya was being used as a weapons storage depot to arm the anti-Assad “rebels.”

The attack at Benghazi was described by this administration and the Clinton State Department as a spontaneous protest over an internet video, although that narrative was proven to be a lie. It was a lie they continued to stick with to hide the fact that the U.S., in conjunction with other NATO allies, were actually doing the work of Saudi Arabia. But why – who benefits? To understand the answer to that question, we must look at what Saudi Arabia is and how the Saudi royals came to power. Much like the U.S., the nation of Saudi Arabia itself is a captured operation, established by a cabal of globalists for the sake of oil. It would be helpful to understand the role Aramco and other oil interests played in the establishment of the Saudi power structure.

As the Obama regime continued forward to advance this Saudi-globalist agenda, Russia’s Putin warned the U.S. that the insanity of destabilizing Syria was not in their best interests, and certainly not in ours. When the warnings were not heeded, proxy groups for Russia, Syria and Iran, in the form of Ansar al Sharia and AQIM launched a deadly assault on the CIA operations center in Benghazi.

The continued pressure of possibly exposing the true nature of the activities in Benghazi, from the illegal arms trafficking in violation of international law to the attack itself, became a serious annoyance to the globalist planners and the Obama subjects to the Saudi royals. The assistance to the anti-Assad rebels was interrupted, albeit temporarily, by this exposure. Consequently, the plans for Syria did not go off as intended, and the timetable had to be extended. Now the anti-Assad rebels are “on the ropes,” and they are being beaten with every passing day, having lost much of the covert assistance of the CIA.

This is the reason the true account of Benghazi has yet to be told to the American people, and the reason that the official accounts are continually being pushed in place of the truth.

If you have understood how we arrived here by the short summary provided, then you will see that we are standing on the brink of not just a regional war, but a global war. Those in power do not want you to know their plans until there is nothing anyone can do to stop them.

It is vital to understand that the embassy closures are a signal of the rapidly escalated intervention in the region by the US. It is a modern day equivalent to the Bay of Pigs, except Barack Hussein Obama is no John F. Kennedy. Those old enough might recall that the CIA trained and inserted a group of “freedom fighters” into Cuba to oust Castro. Exactly like the rebels in Syria, those fighters could never overthrow Castro without direct U.S. military intervention and assistance. The situation is exactly the same in Syria today.

The difference is that Kennedy saw the plan for exactly what it was – a globalist plan not to defeat communism, but to engage us in a larger war to the benefit of the globalists and the military-industrial complex. He refused to take the bait and in so doing, bought the world time by avoiding World War III.

Unlike Kennedy who became his own man while in office, Obama continues the globalist agenda by supporting the CIA trained and backed anti-Assad rebels, and is now leading us to the brink of World War III.

To say that the threat to our embassies is from some nebulous threat by al Qaeda is like saying that the group at the Bay of Pigs were just a bunch of Cuban locals. Nothing that we are being told even remotely approaches the truth, yet few seem to grasp the seriousness of what is unfolding before our very eyes.

Our involvement in the Middle East and North Africa is so large that it would be difficult not to telegraph our actions in advance. Therefore, is it possible that the unspecified al Qaeda threat is actually a cover story for some anticipated action in the region?

We are watching brinkmanship at multiple levels on a global chess board. We have done much to destabilize whatever relative peace might have existed in the Middle East through our actions at the hands of our globalist power brokers. Russia, Iran, Syria and China are not amused, and are not looking the other way. The time clock for the anti-Assad rebels is quickly running out. This administration and every elected official who has signed on to do the work of the Saudis and their handlers have painted us into a corner from which there is little hope for escape. We cannot trust anything we are being told, and nothing we are being told even remotely approaches the truth.

We are seeing the beginnings of the transformation from a cold war to a hot war at the nation-state level. We are about to see a trigger event, after which nothing will be the same.

Related:
Spitting-in-the-wind foreign policy
Washington Is Driving The World To The Final War