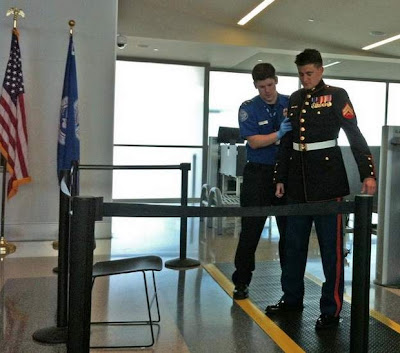 TSA Harasses And Shames Yet Another Disabled Veteran. Medal adorned soldier was wearing “too much metal” for security officers.


A Purple Heart Marine was groped and swabbed by TSA agents recently at a California airport while on his way to a ceremony to honor him as veteran of the year in his district.

Cpl. Nathan Kemnitz sustained severe injuries from a IED detonation while on duty in Fallujah, Iraq in 2004. While traveling to Sacramento, to receive the award, TSA agents at Sacramento International Airport pulled Kemnitz aside for additional screening.
When the screeners ordered him to lift up his arms for a full body scan, the decorated veteran told the TSA goons that because of his injuries, he cannot lift up his right arm.
‘My right arm doesn’t work. It’s a lot of hassle for me to do that,’ Kemnitz told The Military Times.

The screeners then proceeded to probe underneath Kemnitz’s medals, while feeling under the Marine’s waistband and swabbing his shoes for explosives.
Disgusted with his treatment, Kemnitz’s escort Patricia Martin snapped photos of the search and made them public.

“At some places I’m treated like royalty and at some like a terrorist. There’s got to be something in the middle,” Kemnitz told reporters.
In the following video, taken from a 2012 speech, Kemnitz explains how he was injured:

The TSA issued a standard response yesterday denying any wrongdoing:
“As is standard procedure for all passengers, if travelers alarm when passing through a metal detector or an advanced imaging technology (AIT) unit, additional screening is required in order to resolve that anomaly.” said TSA spokesman Ross Feinstein.
To make matters even worse, when Kemnitz arrived for the ceremony at the state capitol building in Sacramento, he received even worse treatment at the hands of security guards.
Unhappy with the fact that Kemnitz was dressed in full uniform, the guards told him that he was wearing “too much metal” and ordered him to remove his dress blue blouse.
Kemnitz refused to do so and an argument broke out, leading Kemnitz to describe the security personnel as “rude and unapologetic”.

California state capitol officials are yet to respond to the incident.

“What does a uniform and heroism represent if our own citizens — in this case employees of the TSA and security personnel — have no regard for them?” wrote Kemnitz’s escort, Patricia Martin, to Veterans Affairs Secretary Eric Shinseki following the incidents.
“I feel so strongly that you need to know just how shamefully even a Purple Heart recipient/disabled veteran can be treated by some TSA and security employees,” she said.

The TSA has been routinely flagged up for harassing disabled travelers, including veterans.
Back in March, a wounded Marine’s account of mistreatment at the hands of the TSA, led the agency to deny any wrong doing, with agents claiming that the wheelchair bound veteran made his own decision to attempt to get up and walk through a body scanner, and then to take off his prosthetic legs.

Eventually, following involvement from Rep. Duncan Hunter, R-Calif., the TSA announced that in response to the incident it had changed its rules to eliminate a requirement that injured troops remove their shoes, jackets or hats. However, in order to qualify for such treatment, the agency says that wounded veterans must forewarn officials before traveling.

Email ThisBlogThis!Share to TwitterShare to FacebookShare to Pinterest
Labels: veterans