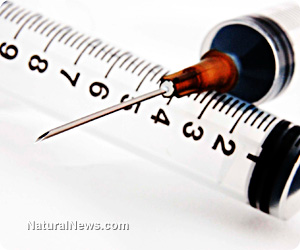 The Centers for Disease Control recently published valuable information about polio vaccines on their site, but afterwards retracted the information.


Why has that information been taken down? Regardless, a Google snapshot of this information as it appeared on July 11, 2013 is cached here.

The saved CDC information comes right out and admits that more than 98 million Americans during a span of eight years were injected with a cancer-causing polyomavirus called SV40.

This fact alone should serve as a testament to anyone: always question medical professionals who say that you or your child needs a certain vaccine or prescription. So much "medicine" today is actually poison. Professionals are often duped into believing in the safety of a vaccine or prescription, when all along it may be laced with cancer-causing, health ravaging virus, heavy metals, fungus, formaldehyde, or neurotoxins.

SV40 stands for Simian vacuolating virus 40 and was found in monkeys in 1960. This polyomavirus existed in contaminated batches of polio vaccinations in the 50s and early 60s. Fragments of this virus have shown up in human brain, bone, and lung cancers. This virus is known for causing cancerous tumors.

Uniquely, humans have built in tumor-suppressing genes. The SV40 virus effectively disables those genes, suppressing them through the SV40 T-antigens. This leads to mutated genes that spawn uncontrollable cellular proliferation, leading to cancer.

Michele Carbone, Assistant Professor of pathology at Loyola University in Chicago, has recently found fragments of the SV40 virus in 40% of human bone cancers and in 60% of mesothelioma cancers.

Experts in the field are beginning to conclude that the Salk and Sabin polio vaccines were responsible for injecting cancer-causing viral strains into people, mutating their genes and welcoming epidemics of cancer.

The contaminated vaccine has been estimated to have adversely affected 10 to 30 million people.


The discovery of SV40

SV40 was first found by Dr. Bernice Eddy when she studied the minced kidney cells of rhesus monkeys. "The cells would die without any apparent cause," she reported.  read more