‘Out with the Mafia!’ Mass anti-govt protests backed by Anonymous grip Spain 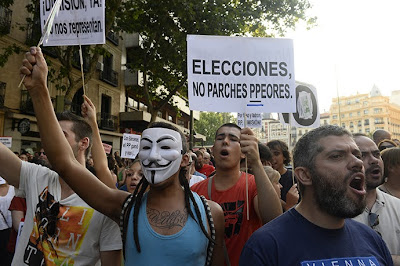 In 30 cities across Spain thousands of people protested government corruption and called for Prime Minister Mariano Rajoy’s resignation. In solidarity with the demonstrations, hacktivist group Anonymous knocked out the ruling People’s Party website.


More than 1,000 people gathered outside the headquarters of the People’s Party (PP) in Madrid. They brandished banners and chanted “Hands up, this is a stick up!” “The treasurer has our money!” and “They do not represent us!”

One person has been arrested, while seven police and five protesters were injured in the massive demonstrations. 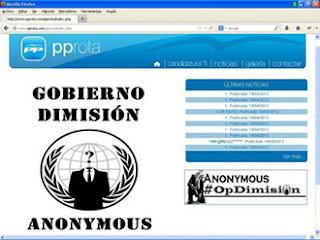 A few hours before the protests began on Thursday, hacktivist group Anonymous infiltrated the People’s Party website. They emblazoned their logo on the homepage of the website under the banner “Government Resignation.” The hacker group published the news on its Twitter feed under the hastags #OpDimisión (Resignation) #FueraLaMafia (Out with the Mafia).

A wave of public indignation was triggered following the latest revelations in a government corruption case that has scandalized Spain. It concerns the PP’s former treasurer Luis Barcenas, who stands accused of a creating a slush fund containing millions of euro which was used to pay out “gifts” to party officials and illegally finance the party.

Spanish newspaper elMundo reported this week that senior party officials had shared 8.3 million euro ($10.9 million) between them from 1990 to 2008, citing court documents.

The PP has disowned Barcenas, who is currently awaiting trial, but the former treasurer has threatened to reveal the full extent of the legal payments and name names. He has already alleged that Prime Minister Rajoy received illegal payments before he became prime minister. 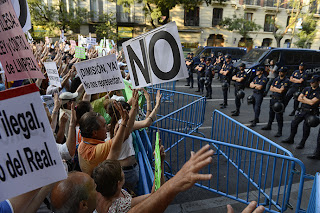 Rajoy has denied the allegations and claims they are blackmail and an attempt by Barcenas to obligate the government to intervene in his trial.

The political scandal has enraged the Spanish public who are already disillusioned at the government’s failure to drag the country out of the current economic crisis.