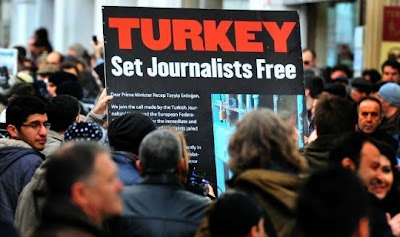 Sixty-four journalists are currently under arrest and another 123 are facing charges of terrorism, said a report issued by the opposition Republican People's Party (CHP) Tuesday.

"Mr. Prime Minister has turned the country into a half-open penitentiary and made it impossible to live for journalists," said CHP leader Kemal Kılıçdaroğlu during a press briefing.

Earlier this month, Reporters Without Borders issued a statement on the Istanbul police's targeting of journalists during recent demonstrations. "Several journalists critical of recent government policy have been fired, publications have been banned, media have been prevented from working, and many foreign journalists have been arrested and ordered to leave," they wrote.

According to reports, 59 journalists have been removed from their positions since May 28—when the Instanbul park sit-in sparked a wave of demonstrations against the government and their authoritarian rule.

United Press International reports that 22 of those journalists were fired—a number of them simply over their Twitter commentary—and the remainder resigned in the face of the severe censorship.

Those journalists worked "hard for the public's right to be informed and they paid for it with their jobs," said Gokhan Durmus, head of the Istanbul branch of the Turkish journalists union, adding that the removals were related to "censorship policies followed by some media outlets in dealing with the Gezi Park resistance."

Among those who have been fired is veteran journalist Yavuz Baydar who was dismissed Tuesday from the daily Sabah, days after the New York Times ran an op-ed in which he, ironically, highlighted the deepening ties between Turkish media owners and the government.

In it Baydar writes:

The problem is simple: one need only follow the money. Turkey’s mainstream media is owned by moguls who operate in other major sectors of the economy like telecommunications, banking and construction. Since only a few large TV channels and newspapers make profits, the proprietors tend to keep them as bait for the government, which needs media managers who are submissive to the will of politicians. [...]

It’s not possible to conduct serious journalism in such a polluted system. These conflicts of interest have transformed Turkey’s major newsrooms into prisons: coverage of economic corruption in Turkey today is almost zero. [...]

The more media moguls get involved in shady dealings with governments, the more their greed blocks all decent journalism and destroys journalists’ ability to hold the government accountable. A corrupted media can never uncover corruption in a credible manner.