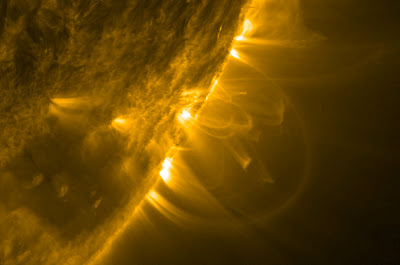 Cambridge, MA - The Sun's outer atmosphere, or corona, has posed an enduring mystery. Why is it so hot?


The Sun's visible surface is only 10,000 degrees Fahrenheit, but as you move outward the temperature shoots up to millions of degrees. It's like a campfire that feels hotter the farther away you stand.

To understand how the corona is heated, some astronomers study coronal loops. These structures are shaped like an upside-down U and show where magnetic field lines are funneling solar gases or plasma.

Our best photos of the Sun suggest that these loops are a constant width, like strands of rope. However, new work shows that this is an optical illusion; the loops are actually tapered, wider at the top and narrower at the ends. This finding has important implications for coronal heating.
"You need less energy to heat the corona if the loops have a tapered geometry, which is exactly what we found," says lead author Henry Winter of the Harvard-Smithsonian Center for Astrophysics (CfA).

Winter presented his findings today in a press conference at a meeting of the American Astronomical Society Solar Physics Division in Bozeman, Mont.
Winter and his colleagues constructed a computer model of a tapered loop using basic physics. Then they processed their model to show how it would look when photographed by instruments like the High-resolution Coronal Imager (Hi-C) or the Solar Dynamics Observatory's Atmospheric Imaging Assembly (AIA).

They found that even the best available images wouldn't have the resolution to show the loop's true structure. As a result, a tapered loop would appear tubular even though it wasn't.
"In science we always compare theory to reality. But if your view of reality is incorrect, your theory will be wrong too. What we thought we saw could be just an effect of the instrument," explains Winter.

Historically, as we have gotten better and better photos of coronal loops, they have revealed more and more structure. What first appeared to be a single loop turned out to be made of many smaller strands. The team's work shows that better instruments with higher resolution are still needed to reveal the true shape and structure of the loops.
"Coronal loops are like Russian nesting dolls. We keep pulling them apart but we haven't gotten to the smallest one yet," says Winter.
Winter's co-authors are Chester Curme (Boston University), Katharine Reeves (CfA), and Petrus Martens (Montana State University).

Headquartered in Cambridge, Mass., the Harvard-Smithsonian Center for Astrophysics (CfA) is a joint collaboration between the Smithsonian Astrophysical Observatory and the Harvard College Observatory. CfA scientists, organized into six research divisions, study the origin, evolution and ultimate fate of the universe.