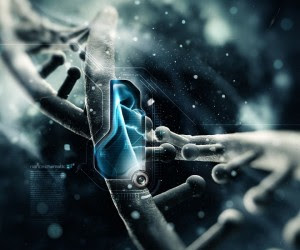 The human race knows very little of itself, almost like a race with amnesia. As we continue to move forward through time, new discoveries are made that make old theories obsolete and false.


It’s a good lesson that shows us how we can attach ourselves to “truths” and believe them whole-heartedly, often forgetting that truth is constantly changing and new paradigms of perception always lurk around the corner.

Decades after scientists described our “chemical code” of life using the double helix DNA, researchers have discovered four-stranded DNA within human cells. The structures are called G-quadruplexes, because they form in regions of DNA that are full of guanine, one of the DNA molecule’s four building blocks. The others are adenine, cytosine and thymine. A hydrogen bond is responsible for holding the four guanines together. The four stranded DNA usually presents itself right before cell division.

The discovery was published online in Nature Chemistry, and you can take a look at it here. The study was led by Shankar Balasubramanian at the University of cambridge, UK.

"For us, it strongly supports a new paradigm to be investigated – using these four-stranded structures as targets for personalized treatments in the future.We have found that by trapping the quadruplex DNA with synthetic molecules we can sequester and stabilise them, providing important insights into how we might grind cell division to a halt"— Shankar Balasubramanian

The study went on to show certain links between concentrations of four-stranded G-quandruplexes and the process of DNA replication, which is crucial to cell division and cell production. G-quadruplexes, (when targeted with synthetic molecules responsible for trapping and holding these DNA structures) prevent cells from replicating their DNA, thus blocking cell division. Scientists believe that this discovery could possibly lead to a stop in cell proliferation at the root of cancer

"We are seeing links between trapping the G-quadruplexes with molecules and the ability to stop cells dividing, which is hugely exciting. The research indicates that G-quadruplexes are more likely to occur in genes of cells that are rapidly dividing such as cancer cells. It’s been sixty years since its structure was solved but work like this shows us that the story of DNA continues to twist and turn” – Shankar Balasubramanian

We now know that G-quandruplexes form in the DNA of human cells. If anybody had mentioned this earlier, they would probably be labelled as crazy. Maybe we could take this as a lesson and accept the fact that there are always new discoveries to be made about our biology, as well as the nature of our reality. For all we know, our DNA could be multidimensional in nature? It could be 12 stranded DNA? Maybe we have yet to discover it?  Maybe a majority of our DNA, and the biological functions it serves are largely undiscovered. Maybe some portions of our DNA have yet to be activated? The more we discover about our own biology, the better, as we are witnessing with the discovery of the G-quandruplex.