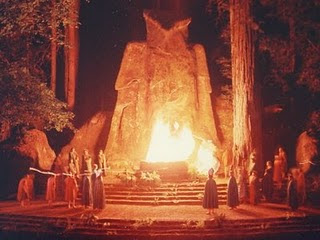 Activists are beginning to gather outside Bohemian Grove in Monte Rio to protest the annual meeting of the global crime syndicate, existing of politicians, bankers, media moguls and CEO’s, which takes place from July 13 to July 28.


The secretive, all-male club, founded over a hundred years ago in 1872, has historically claimed some of the worlds most powerful men as members including Henry Kissinger, George W. Bush, Bill Clinton, Ronald Reagan, Richard Nixon,  Donald Rumsfeld, Karl Rove and Dick Cheney.


Besides an ‘off the record’ meeting between some of the world’s most powerful men, one of the most controversial aspects of the two-week gathering revolves around the ‘Cremation of Care’ ceremony that depicts a mock child sacrifice performed in front of a forty-foot stone owl called Moloch, which many believe is Satanic.


Following on from last months’ Bilderberg meeting which received widespread media attention – a victory for protesters and alternative media activist, you would be forgiven for believing that these kind of unethical and secretive meetings are becoming mainstream news.
However Bohemian Grove still remains ignored, which serves as a reminder of how controlled the media actually is and just how much work we have left to do in exposing secret meetings that allow for the lobbying and formation of global policy.
Take a look at last years protests: