Has The Era Of Genetically Pure “Gattaca Babies” Now Begun? 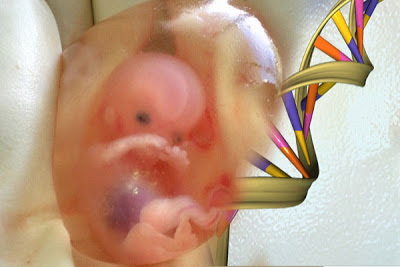 Should selective breeding be used to improve the human race?  Should we genetically screen embryos shortly after conception and choose only those that are the most genetically pure?


This may sound like science fiction, but as you will read about below, the technology for this is already operational.

On the 18th of May, a couple in Philadelphia gave birth to a baby that came from an embryo that was selected thanks to a cutting edge procedure known as “next-generation sequencing”.  This procedure allows scientists to read every letter of the human genome very rapidly and very cheaply.  So will millions of parents soon be lining up to check their potential offspring for “genetic abnormalities”?  Has the era of genetically pure “Gattaca babies” now begun?

This new technology is being heralded as a great “breakthrough” in the field of human fertility.
According to the Guardian, the scientists that helped develop this new procedure are promoting it as a way to help couples produce a much higher percentage of “healthy” babies…
The first IVF baby to be screened using a procedure that can read every letter of the human genome has been born in the US.

Connor Levy was born on 18 May after a Philadelphia couple had cells from their IVF embryos sent to specialists in Oxford, who checked them for genetic abnormalities. The process helped doctors at the couple’s fertility clinic in the US select embryos with the right number of chromosomes. These have a much higher chance of leading to a healthy baby.
The birth demonstrates how next-generation sequencing (NGS), which was developed to read whole genomes quickly and cheaply, is poised to transform the selection of embryos in IVF clinics.

And aren’t healthy babies a good thing?
Of course they are.

But what about all of the babies that are “discarded” in the process?
Dagan Wells, a fertility specialist at Oxford University, screened 13 different embryos for the couple from Philadelphia.  His testing helped them select the “best” one…

After standard treatment at the US clinic, the couple had 13 IVF embryos to choose from. The doctors cultured the embryos for five days, took a few cells from each and sent them to Wells in Oxford for genetic screening. Tests showed that while most of the embryos looked healthy, only three had the right number of chromosomes.
“It can’t make embryos better than they were in the beginning, but it can guide us to the best ones,” said Wells.

So what happened to the less desirable embryos?
That is a very good question.

Unfortunately, this is just the beginning.  A second baby that came from an embryo that went through the same kind of screening process will be born in the United States next month.
Of course fertility clinics have been helping parents select the “best embryo” for years.  But now this new screening process is being hailed as a much more “scientific” way of improving the chances of producing a “desirable” baby…

Embryo screening involves separating embryos with the best chance of producing a pregnancy from those with chromosomal abnormalities.
Traditionally it has involved a “beauty contest” in which technicians pick out the best-looking embryos for transfer to the womb.
But this technique is highly unreliable, since even an embryo that appears “textbook perfect” under a microscope can harbour hidden defects.

And parents certainly don’t want any “hidden defects”, do they?

A lot of scientists involved in this field of research truly believe that they are doing a wonderful thing for parents.  They are fully convinced that helping parents transform the process of fertility from “a game of craps” into a process that they can control is a worthwhile endeavor…
Lee Silver, a professor of molecular biology and public policy at Princeton University, urged the audience members to look at someone sitting next to them.
“That person and you differ at over 1 million locations in your DNA [deoxyribonucleic acid]. Most [of these variations] don’t do anything,” Silver said. “[But] even if you are a healthy adult, 100 [of these] can cause deadly childhood disease in your children or grandchildren.”

“Mother Nature is a metaphor,” he continued. “And it is a bad metaphor, because in reality inheritance is a game of craps … It won’t have to be that way in the future.”

But where does this end?

At first, they may just weed out babies that have a high chance of getting sick or being deformed.
Next, parents may start selecting babies based on hair color, eye color, etc.
And eventually, “defective” embryos may be banned entirely because they would be “too much of a burden on society”.

Can you see where this is going?

Back in 1997, a movie entitled Gattaca came out that envisioned a world where those that are not “genetically pure” are greatly discriminated against.  The following is a summary of the plot for the movie…

Vincent is one of the last “natural” babies born into a sterile, genetically-enhanced world, where life expectancy and disease likelihood are ascertained at birth. Myopic and due to die at 30, he has no chance of a career in a society that now discriminates against your genes, instead of your gender, race or religion. Going underground, he assumes the identity of Jerome, crippled in an accident, and achieves prominence in the Gattaca Corporation, where he is selected for his lifelong desire: a manned mission to Saturn’s 14th moon (titan). Constantly passing gene tests by diligently using samples of Jerome’s hair, skin, blood and urine, his now-perfect world is thrown into increasing desperation, his dream within reach, when the mission director is killed – and he carelessly loses an eyelash at the scene! Certain that they know the murderer’s ID, but unable to track down the former Vincent, the police start to close in, with extra searches, and new gene tests. With the once-in-a-lifetime launch only days away, Vincent must avoid arousing suspicion, while passing the tests, evading the police, and not knowing whom he can trust…

At the time, nobody ever dreamed that we would actually see such a thing in the real world.
But these days technology is moving at a pace that is absolutely mind blowing.
And now, it is reportedly even possible to create babies that have DNA from more than two parents.  In fact, scientists in the UK have just been given the okay to start creating embryos with DNA from three parents…

A technique to implant donor DNA from a third party into in vitro embryos has been approved by the British Human Fertilisation and Embryology Authority (HFEA). The technique is a form of “germline” alteration that involves modification of the person’s mitochondrial DNA (MDNA) to create genetic changes that will be carried on throughout subsequent generations.

The recommendation to allow the technique follows a public consultation ordered by the government in which the HFEA said they found “broad support”. The report said that the potential benefits outweighed the risks and that there is no evidence that the procedure is unsafe.

The HFEA report said that it should only be used to avoid “serious diseases” and that clinics offering the technique must be licensed. It also recommended that the children created using this genetic alteration technique be monitored.

As technology continues to advance, will their be any limits on what is possible?
One Harvard professor is even trying to recruit someone to give birth to a Neanderthal baby.

Professor George Church of Harvard Medical School believes he can reconstruct Neanderthal DNA and resurrect the species which became extinct 33,000 years ago.
His scheme is reminiscent of Jurassic Park but, while in the film dinosaurs were created in a laboratory, Professor Church’s ambitious plan requires a human volunteer.

He said his analysis of Neanderthal genetic code using samples from bones is complete enough to reconstruct their DNA.
He said: ‘Now I need an adventurous female human. It depends on a hell of a lot of things, but I think it can be done.’

We are moving into a time when genetic manipulation of the human race is going to become commonplace. Scientists are assuring us that there is absolutely nothing to be concerned about.

Unfortunately, they have no idea what they are messing around with.