Dolphins Call Each Other By Names, Their Whistles Form A System Similar To Human 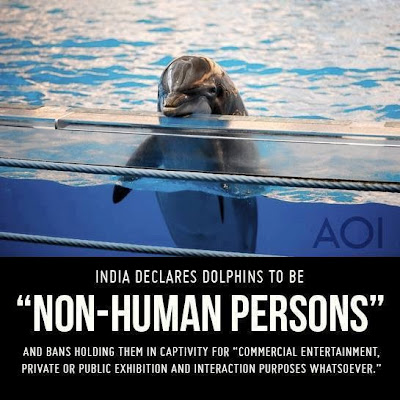 New research by marine biologists at the University of St Andrews has revealed that dolphins name themselves using unique 'signature' whistles.


The study, by Dr Vincent Janik of the University's Sea Mammal Research Unit and his colleagues in the USA, suggests that dolphins share the human characteristic of recognising themselves as individuals with separate identities.

The researchers studied a group of bottlenose dolphins in Sarasota Bay, Florida and found that not only do they appear to convey information about themselves by their whistle, but they seem to recognise each other's unique whistle. Recognition of the signature whistle can be compared to humans recognising a name.

Dr Janik, a research fellow at the School's Sea Mammal Research Unit (SMRU), said: "As infants, bottlenose dolphins develop their own signature whistles to use throughout their lifetimes. Group members repeat these whistles back during vocal interactions, and we believe that the whistles form a system similar to that of human names."

The researchers played synthetic whistles to dolphins through an underwater speaker. In 9 out of 14 cases, the dolphin would turn more often toward the speaker if it heard a whistle resembling that of a close relative, demonstrating that the synthetic signature whistle contains information that is used by the listeners to identify the caller.

Since dolphins reacted less to synthetic whistles of unrelated dolphins, the research suggests that dolphins use unique signature whistles to keep track of friends and family and maintain group cohesion.

Dr Janik concluded: "Since voice features are affected by changing water pressure, voice-independent names might be a reliable way to convey identity."