Why Are The Chinese Gobbling Up Real Estate And Businesses In Detroit? 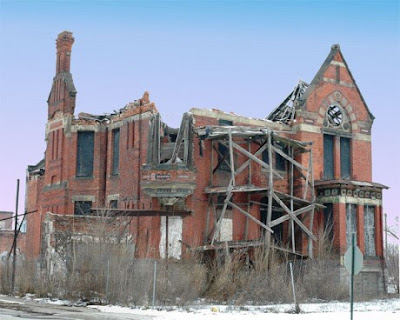 Something very strange is happening to Detroit.  Once upon a time, it was the center of American manufacturing and it had the highest per capita income in the United States.


But now the city is dying and the Chinese are moving in to pick up the pieces.  Lured by news stories that proclaim that you can buy homes in Detroit for as little as one dollar, Chinese investors are eagerly gobbling up properties.  In some cases, this is happening dozens of properties at a time.  Not only that, according to the New York Times “dozes of companies from China” are investing in businesses and establishing a presence in the Detroit area.  If this continues, will Detroit eventually become a city that is heavily dominated by China?

At this point, not too many others appear interested in saving Detroit.  Right now, there are approximately 78,000 abandoned buildings in Detroit and about one-third of the entire city is either vacant or derelict.  People have been moving out in droves and there are only about 700,000 residents left.

For many Americans, Detroit is about the last place that they would want to live.  But to many Chinese, this sounds like a perfect buying opportunity.  According to a recent Fox News report, real estate agents in Detroit are being overwhelmed with inquiries from China…

Downtown Detroit is home to one of the worst housing markets in the country, as prices of homes have collapsed and foreclosures have soared in the city’s depressed economy.

But some Chinese investors hungry for real estate are hoping Detroit’s losses will be their gain. After Detroit filed for bankruptcy July 18, Motor City property has been a hot topic on China’s social media platform, Weibo, according to a Quartz.com report.

News of the bankruptcy, coupled with a Chinese TV report in March that claimed you could buy two houses in Detroit for the same price as a pair of leather shoes, has piqued investors’ interest.

And these buyers appear to be quite serious.  One buyer reportedly bought 30 properties recently, and other buyers say that they want to purchase even more homes than that…
read more