Has An Ancient Giant Handprint Been Found In A Cave In Nevada? 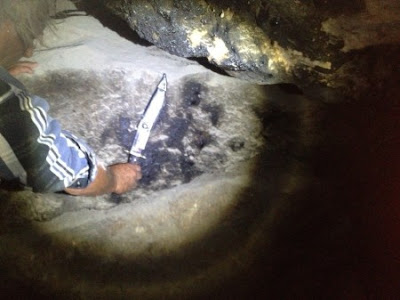 Something really weird has been found on the wall of a cave in Nevada, and it is shaking a lot of people up.


Two paranormal investigators named MK Davis and Don Monroe claim to have stumbled upon the handprint of an ancient giant in Lovelock Cave, and the pictures that have been released to the public are absolutely startling.  If this handprint is real, it is estimated that it would have belonged to someone 18 feet all.  And what makes all of this even more compelling is that there is a very old Native American tradition that says that a tribe of red-haired giants was burned inside that cave a very long time ago.  So could we actually be looking at solid evidence that the old Native American tradition about the red-haired giants is actually real?

There has been a tremendous amount of interest in this particular cave going all the way back to 1911.  At that time, two guano miners claimed that they discovered several sets of giant bones inside the cave…

In 1911 David Pugh and James Hart, two guano miners (yes, mining bat poo is really a thing) were excavating a cave on the eastern side of Nevada when they found something intriguing buried under 250 tons of excrement.

According to the men’s bizarre tale, hidden beneath six feet of bat crap they discovered several sets of giant bones, remains which many now believe belong to the Si-Te-Cah, a storied Paiute tribe of red-haired cannibal giants. Legend has it that the last remaining giants were burned alive inside the cave thousands of years ago.

Unfortunately, nobody knows where those bones are today, and without hard evidence the excitement over that cave subsided over the years.

But now this discovery by MK Davis and Don Monroe is renewing interest in Lovelock cave.  According to Paranormal Geeks Radio, this handprint has a number of characteristics that point to it being authentic…

This knife and its sheath have been used to get a measurement. It is 18 inches. Look at Don’s hand compared to print!  If the proportions are equal to regular humans, this being would be 18 feet tall! read more