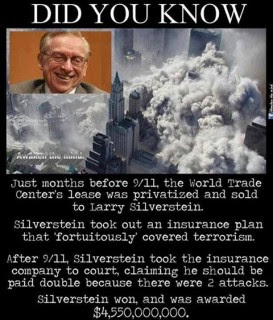 Is this the world’s worst case of insurance fraud…ever?

That’s what many are saying, as the world’s biggest real-estate swindler and the world’s most corrupt judge meet in a Manhattan courtroom on Monday, Tuesday, and Wednesday. At issue: billions of dollars in loot from the demolition of the World Trade Center complex on September 11th, 2001.

World Trade Center owner Larry Silverstein – who confessed on national television to “pulling” World Trade Center Building 7 – will appear in the courtroom of Judge Alvin Hellerstein at 500 Pearl St. in New York City. The non-jury trial, which is expected to last three days, will decide whether Silverstein is entitled to recover $3.5 billion from airlines and airport-related companies, in addition to the $4.9 billion he has already received for his “losses” on September 11th.

The question on everyone’s mind is: Why is Silverstein claiming that airliners destroyed his buildings, when he has already confessed to demolishing at least one of them himself? In the 2002 PBS documentary “America Rebuilds,” Silverstein admitted to complicity in the controlled demolition of WTC-7, a 47-story skyscraper that dropped into its own footprint in 6.5 seconds.
The mysterious destruction of Building 7 has become the Rosetta Stone of 9/11.

Virtually all independent experts who have studied the case, including thousands of architects and engineers, agree that the government’s explanation – that a few small office fires somehow destroyed WTC-7 – is a non-starter. Building 7, these experts say, was obviously taken down in a controlled demolition, as Silverstein himself admitted. (A nationwide ad campaign called “Re-Think 9/11” will remind millions of Americans about Building 7 this September.)

Despite his confession to demolishing his own building, Silverstein has already received $861 million from insurers for Building 7 alone, as well as over $4 billion for the rest of the Trade Center complex. That $861 million for WTC-7 was paid on the basis of Silverstein’s claim that airplanes were somehow responsible for making Building 7, which was not hit by any plane, disappear at free-fall acceleration.

The insurance companies are not openly accusing Silverstein of insurance fraud, presumably because doing so would threaten to demolish the 9/11 cover-up and bring down the US and Israeli governments at free-fall speed. But they have gone so far as to call Silverstein’s demand for more money “absurd,” a considerable understatement.
The insurance companies claim that Silverstein’s demands amount to “double recovery.” They say that Silverstein was already paid $4.9 billion – vastly more than the paltry $115 million or so that he and his backers paid for the complex just weeks before it was demolished – so why is he asking for another $3.5 billion? Silverstein’s answer: He needs the money.

As Christopher Bollyn wrote in 2002:
“Silverstein and Eisenberg have both held leadership positions with the United Jewish Appeal (UJA), a billion dollar Zionist ‘charity’ organization. Silverstein is a former chairman of the United Jewish Appeal-Federation of Jewish Philanthropies of New York, Inc. This is an umbrella organization which raises hundreds of millions of dollars every year for its network of hundreds of member Zionist agencies in the United States and Israel.”

According to Ha’aretz, Silverstein is a close friend of Israeli Prime Minister Netanyahu. They speak on the phone every weekend.
The insurance companies have likewise neglected to mention that after doubling his insurance coverage immediately before 9/11, Silverstein re-doubled his winnings after 9/11 by claiming double indemnity. According to Silverstein’s spokesman, “the two hijacked airliners that struck the 110-story twin towers Sept. 11 were separate ‘occurrences’ for insurance purposes, entitling him to collect twice on $3.6 billion of policies.” The bizarre double-indemnity claim was approved in 2004.

Additionally, the insurers have failed to mention that on the morning of 9/11, Silverstein and his daughter both failed to show up for their daily breakfast at Windows on the World restaurant atop the North Tower. Both offered flimsy pretexts – Silverstein claiming that he had suddenly remembered a dermatologist’s appointment.
How has Silverstein managed to get away with murder, in the most obvious case of insurance fraud ever?

Thanks to his partner in crime, Judge Alvin Hellerstein.
Hellerstein’s courtroom is Ground Zero in the cover-up of the crimes of 9/11. Virtually all 9/11 litigation has been funneled through his courtroom, including Ellen Mariani’s recent lawsuit against Bush, Cheney, Rumsfeld, Wolfowitz, and others.
Like Silverstein and Eisenberg, Hellerstein is a rabid Zionist with close ties to Israel. The judge’s son and sister both emigrated from the US to orthodox Zionist settlements in the Occupied Territories.

Investigative journalist Christopher Bollyn writes: “Hellerstein’s son is an Israeli lawyer who emigrated to Israel in 2001 and whose law firm works for and with the Rothschild-funded Mossad company responsible for the 9-11 terror attacks.”
Bollyn notes that Hellerstein’s son, an Israeli lawyer, represents “the Mossad-controlled airport security firm named International Consultants on Targeted Security (ICTS) N.V., which is the owner of Huntleigh U.S.A., the passenger screening company that checked the passengers that boarded the aircraft at the key airports on 9-11.”

Additionally, Bollyn writes, “Both Alvin Hellerstein and his son Joseph worked for the well-known Jewish law firm of Stroock, Stroock & Lavan before moving to the positions they now hold…Stroock, Stroock & Lavan played a key role in the setting up of 9-11…Stroock has a long history of representing the Rothschilds and other high-level Zionists.”

Will New York City 9/11 skeptics protest the Silverstein-Hellerstein trial this Monday through Wednesday?
Will truth and justice ever triumph?

In order to triumph, truth and justice will have to defeat the world’s wealthiest and most powerful criminal network.

Every year activists converge on Ground Zero of the biggest crime in modern human history to demand a genuine investigation and accountability for government failures.

This year, 9/11 activists are more organized than ever for this anniversary of 9/11. One group, GroundZero911.com, is planning guest speakers, concerts, street actions, silent vigils, and other activities.

These “truthers” have been ridiculed in the past by the establishment as if truth is somehow a bad thing in a world full of deceit. But now, to a growing majority of the world’s population, the U.S. government’s official version of the September 11th attacks does not hold water scientifically, rhetorically, or sensibly.

There are many theories as to what actually took place on 9/11, the government’s version just being one of them.  And as more people find themselves distrustful of the government due to revelations of other lies, more people begin to question the government’s account of the attacks that launched the U.S. into wars of aggression and dramatic losses of liberty at home.

Just acknowledging that we were lied to about 9/11 is paradigm changing. The fact is that if you do your own independent research, you’ll find that evidence is not on the government’s side. Once the lie is realized and the post-9/11 actions scrutinized, a much more cynical view of U.S. government and its corporate war machine comes rushing into your consciousness — never to be expelled.

This is why so many who inherently know something is wrong with the story are afraid to look any closer.  Once you know the truth, or at least acknowledge the lies, there’s no going back to blissful ignorance.

Translation: each new “truther” is dangerous to the status quo because they oppose foreign wars, the war on terror, and they defend civil liberties. They stand for peace, liberty, justice, transparency and human rights, yet the establishment portrays them as the bad guys. As such, 9/11 truth outreach is the spearhead for the peaceful revolution of ideas.

The stated mission of GroundZero911:

GroundZero911.com aims to provide activists with 9/11 Anniversary event information as well as the tools necessary for public outreach.

Our goal is to encourage anyone that believes we need a new investigation into the events surrounding September 11th, 2001 to come to New York City for the Anniversary.

This movement was started by the victims’ family members who had questions. Their loved ones were murdered and they’ve never been given answers. It’s time to demand those answers, to unite together to demand justice. Let’s make history this September 11th by coming together in New York City in hopes of the justice we’ve all been fighting for.

Even if a new investigation or justice is unlikely, these events serve a vital function in educating others who may finally be ready to start asking questions.

This video contains a speech by Adam Kokesh:

Email ThisBlogThis!Share to TwitterShare to FacebookShare to Pinterest
Labels: 9/11