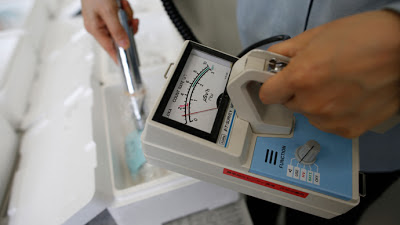 Levels of radioactive cesium-134 in a well at Fukushima nuclear power plant are up to 90 times higher than just three days ago, and may spread into the Pacific Ocean.


Meanwhile, 10 applications to restart reactors under stricter rules have been received.

TEPCO, the company that operated the plant and is now in charge of the cleanup and decommissioning, said that cesium-134 levels in the well water were at 9,000 becquerels per liter, 150 times the legal level. While cesium-137 measured 18,000 becquerels, 200 times the permitted level.

Cesium-137 has a half-life of 30 years and the readings were some 85 times higher than they had been three days earlier.

These are the highest cesium levels found since the March 2011 disaster.

“It is unclear whether the radioactive water is leaking into the sea. After gathering needed data, we will conduct analyses,” a TEPCO official told the Japanese media.

Although the total levels of cesium collected on July 8 were far higher than those collected just three days earlier on July 5, levels of other radioactive materials, such as strontium, remained the same as three days ago.

“We do not know why only cesium levels have risen,” a TEPCO spokesman said.

The latest findings, just 25 meters from the Pacific Ocean, were made just a month after TEPCO detected cesium in the groundwater flowing from high ground fairly far from the sea into its destroyed plant.

The spike, along with discoveries of other radioactive elements like Tritium and Strontium, suggest that contaminated water is spreading towards the sea from the reactors, which are on higher ground.

It was reported in June that very high levels of strontium 90 were found in groundwater near the stricken plant, but TEPCO officials insisted that it had not leaked into the nearby ocean.

Engineers have been flushing water over the reactors for more than two years to keep them cool, but contaminated water has been building up at the rate of an Olympic sized swimming pool every week and TEPCO is running out of space to store it.

It has applied to channel groundwater, which it says has low levels of radioactive contamination, around the plant and into the sea. Local fishermen have opposed the proposal.

The findings in one of four wells dug by TEPCO at Fukushima since May 24, 2013, come just days after new safety rules came into force designed to avoid a repeat of the disaster and allow Japan to restart it nuclear power stations.

At present only two of Japan’s 50 reactors are connected to the grid, but the government is forging ahead with plans to reopen them, in the face of a skeptical public and rising imported fossil fuel bills to run conventional power stations.

“Some of the units are projected to [restart] one year from now, though I don’t know how many,” Kenzo Oshima a commissioner at Japan’s Nuclear Radiation Authority, told Reuters.