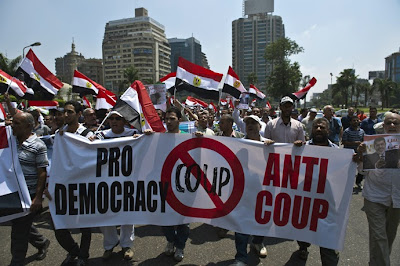 The Egyptian army fired tear gas and clashed with supporters of ousted president Mohamed Morsi in Cairo as thousands of pro-Morsi demonstrators marched towards the presidential palace.


Military forces fired tear gas in Cairo Friday evening, as a group of pro-Morsi protesters aimed to break through the army line. According to state news agency MENA, the soldiers attempted to hold back the crowds from a nearby street, where rival anti-Morsi demonstrators are rallying.

Earlier, scuffles were reported near Al-Azhar University in Cairo after unknown men threw rocks at pro-Morsi demonstrators marching from Al-Azhar mosque, according to Al Jazeera.

Tens of thousands of Morsi supporters have been stopped en route from Rabaa Al-Adawiya Mosque to Abbassiya, where Egypt’s Ministry of Defence is located, Ahram Online reports.

The Egyptian media reported that the demonstrators were marching to the Republican Guard House in Cairo.

Some of the pro-Morsi protesters have stormed Abbasiya Hospital for Mental illnesses, climbing through fences and setting up camp in the hospital’s garden.

Traffic was grounded on nearby Salah Salem Road, as some 5,000 demonstrators gathered around the hospital.

Meanwhile, the Egyptian army has reportedly blocked streets leading to the Republican Guard House. The military blockaded the roads in order to prevent Morsi supporters from reaching the building, according to Al Arabiya.

There were also scuffles with security forces near Al-Azhar mosque, after Morsi’s supporters began shouting chants against Abdul Fatah al-Sisi, Commander-in-chief of the Egyptian armed forces. 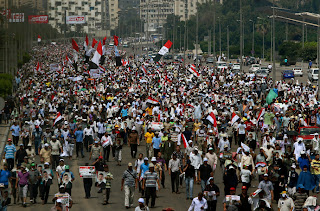 Police fired shots in the air to disperse Muslim Brotherhood supporters after they attacked opponents with rocks and fists. No casualties were reported.

Morsi’s supporters also began a round-the-clock vigil outside a mosque in the Cairo suburb of Sadr City, with thousands flocking there after noon prayers on Friday.

At least 400 protesters marched through the Sinai Peninsula’s main city of el-Arish on Friday. Pro-Morsi supporters also took to the streets of Alexandria and other Nile delta cities.

The Muslim Brotherhood – from which Morsi hails – has called for demonstrations across Egypt, accusing Sisi of deliberately staging a coup to remove Egypt’s first freely elected president from power.

Morsi’s supporters said they came from across the country to join Friday’s rallies, underlining the deep level of support for the Muslim Brotherhood in provincial areas of Egypt.

“We are coming out today to restore legitimacy. We consider what happened secular thuggery. It would never happen in any democratic country,” protester Tarek Yessin, from the southern city of Sohag, told Reuters.

Anti-Morsi protests are also planned for Friday, with Tamarod planning a demonstration close to the Brotherhood’s Nasr City vigil. Tamarod is the youth movement responsible for organizing huge anti-Morsi protests which started on June 30.

They have called their protest “the people against terrorism” and have blamed Morsi’s supporters for the deaths of at least 99 people who have died in violence since Morsi’s removal. More than half of them were killed when troops fired on Islamist protesters outside Cairo barracks on July 8.

On Friday, ten armored personnel carriers were parked on the Nile Bridge - a route Islamist protestors must cross in order to reach the anti-Morsi camp on Tahrir Square.

Earlier in the day, two formations of fighter jets and nine military helicopters circled over Cairo.

The army has fiercely defended its actions to remove Morsi and the Brotherhood from power, saying its decision reflected the popular will of Egyptians, and that Morsi had become incompetent and partisan.

The military has installed an interim cabinet, led by acting president Adly Mansour, which does not include any Brotherhood members or people from other Islamist parties. 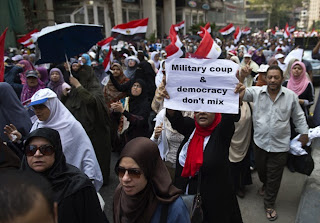 Acting president speaks of ‘protecting lives and human rights’
President Mansour gave his first address to Egypt on Friday, saying the country is going through a “decisive period.” He also accused some elements of society of trying to drag the country toward chaos.

“They want this period to be an introduction to violence and blood, and we want it to establish for the concept of protecting lives and human rights,” Mansour said in the eight minute pre-recorded broadcast.

He didn’t name those people he said were “pushing the nation towards an abyss,” although the statement was presumed to be directed at Morsi supporters.

Mansour did, however, appear to offer an olive branch to the Muslim Brotherhood, saying that justice and reconciliation will be for all “without exclusion or exception.”

Morsi and many members of his former government have been in detention since the army removed him from office on July 3. There have been no clear indications regarding how many people are being held, or where they are located. Hundreds of Brotherhood followers have been rounded up, and arrest warrants issued for most of its leaders.

Meanwhile, the UN is pushing for the interim government to explain why the army detained the ousted president and his aides, and whether it plans to put them on trial. The UN High Commissioner for Human Rights, Navi Pillay, recently asked Egypt’s ambassador to clarify the legal basis for their detention. Rupert Colville, a spokesman for Pillay, said that the Egyptians have so far given no reply.

Pillay also said that the UN hopes to send a team to Egypt to further investigate a July 8 shooting which left more than 50 people dead.