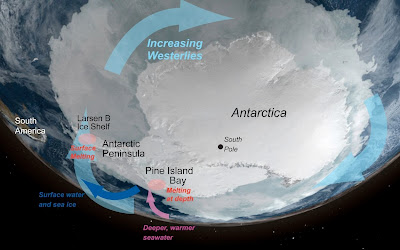 An iceberg in Antarctica recently broke off a glacier and is now floating freely in the ocean.


What makes this so incredible is that the size of this icy mass is reportedly bigger than the city of Chicago.

According to German scientists, this gigantic iceberg broke off Antarctica's Pine Island Glacier Monday, with the body of ice floating throughout parts of the Amundsen Sea.

The scientists said the iceberg was spotted floating in the area by an earth-observing satellite operated by the German Space Agency. The satellite, referred to as TerraSAR-X, further identified a crack forming in the iceberg, which was originally spotted back in October by NASA. When the space agency did a fly over the Pine Island Glacier to investigate a survey of the crack, they studied the fracture that was 15 miles in length and 164 miles wide. 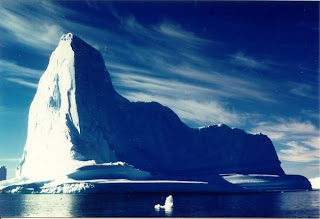 A second fissure formed soon after near the top side of the first crack, which was discovered back in May via satellite images.

Yet researchers note that icebergs breaking off of the Pine Island Glacier is nothing new or rare. In fact, back in 2007 and 2008, the glacier saw two large icebergs severe and float away, making this Icelandic mace the fastest-changing on the West Antarctic Sheet.

However, researchers caution that rapid ecological changes can come from the Glacier's rapid flow, as it "acts as a plug, holding back part of the immense West Antarctic Ice Sheet whose melting ice contributes to rising sea levels."