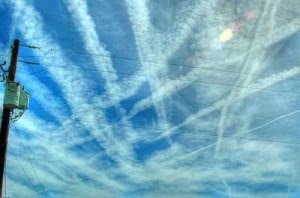 MOSCOW, Russia – Edward Snowden, the hacker who gained access to every secret corner of the Internet during his tenure at the NSA, has come forward with details of a classified project to alter the world’s climate.


The shocking truth, as he says, is that chemtrails are part of a benevolent program aimed at countering global warming. By cooperating in secret with jet fuel manufacturers, government agents have carefully kept the massive chemtrail efforts completely under wraps. Snowden added, “I am only revealing this program because there is no oversight in the scientific community, no public discussion, and little concern for the side-effects which are well known only to a few privileged people interested in continuing the decades-long chemtrail program in secret.”

Because climate change is a threat to U.S. agriculture, it has been labeled a national security issue. With the influence and cooperation of Monsanto, a secret Geoengineering lab dubbed Muad’Dib has been operating since the late 1960s, and the chemtrail program is often referred to by insiders as its “crown jewel.” Muad’Dib has aimed to protect North America’s climate at all costs – even if that means accelerating desertification in Sub-Saharan Africa or spreading trace amounts of carcinogens over lightly populated areas. Other side effects, which scientists at the secret Muad’Dib Geoengineering Lab have predicted, include droughts in the Amazon and powerful windstorms along the East Coast.

Snowden shared decisive documents with The Internet Chronicle, but out of concern for national security, only his testimonial can be published. These documents contain references to scientists who would surely be targeted by foreign counterintelligence, and their knowledge is vital to short-term survival of the United States.

Snowden said, “If this program were to stop, the scientists behind it strongly believe that within just one year the North American climate would spiral out of control, and crop failures would lead to a series of devastating famines that would quickly depopulate urban centers.”

Because the program has been carried out on such a massive scale, skeptics might find Snowden’s story unbelievable. However, Snowden explained that the chemtrail program has been incredibly easy to hide, especially with the cooperation of jet fuel companies, a crucial part of the military-industrial complex. Snowden said, “The chemicals which are released by passenger airplanes have been covertly introduced as ‘additives,’ supposedly to improve efficiency. Only as the plane reaches cruising velocity does the heat and atmospheric pressure cause a chemical reaction that synthesizes the top secret carbon-trapping molecule. This process is imperfect, and many of the by-products are incredibly dangerous even in trace quantities. The most dangerous thing is that although chemtrails are keeping the climate of the U.S. reasonably stable, citizens are bombarded every day with an invisible rain of carbon-laden molecules, and the effect on health is totally unknown.”