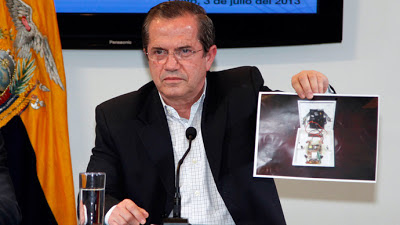 An image of the hidden microphone used to bug an office in Ecuador’s London embassy, where WikiLeaks founder Julian Assange has been living for over a year, was revealed by Foreign Minister Ricardo Patino during a press conference Wednesday.


Patino told reporters the recording device was found beneath a desk in the office belonging to Ana Alban, the Ecuadorean Ambassador to the United Kingdom, according to Reuters. Patino said the microphone was discovered on June 16 before he visited the embassy to meet with Assange, who lives and works in a different room of the office. The British Foreign Office refused to comment on the matter.

“I didn’t denounce this at the time because we didn’t want the theme of our visit to London to be confused with this matter,” Patino said in a press conference Wednesday. “Furthermore, we first wanted to ascertain with precision what could be the origin of this interception device in the office of our ambassador. 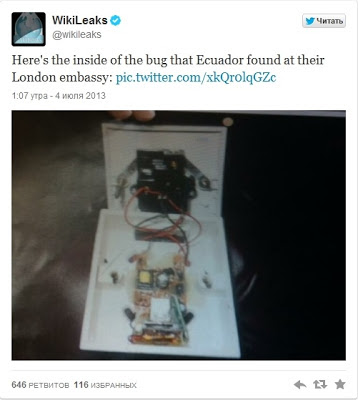 “We are sorry to say so, but this is another instance of a loss of ethics at the international level in relations between governments.”

WikiLeaks tweeted a close-up image of the device, which Patino said held a SIM card and was designed to transmit private conversations from inside the embassy. The microphone is thought to have been in place for weeks.


The British Foreign Office refused to comment and a spokesman for Prime Minister David Cameron said he could not speak on security issues.

Patino met with British Foreign Secretary William Hague on June 17 to discuss Ecuador’s decision to shelter Assange. The WikiLeaks leader is facing an extradition request to Sweden, where he is wanted for questioning in relation to allegations by two women of sexual assault and rape.

If Assange travels outside the embassy he could also be extradited to the United States, where he would likely be charged in connection with releasing thousands of State Department cables and documents regarding military activity in Iraq and Afghanistan. Bradley Manning, who admitted disclosing the information to WikiLeaks, is currently on trial and could be sentenced to life in prison if convicted.

Patino was careful to note during the press conference that he was not accusing the UK of placing the recording device, saying Ecuador “is infiltrated from all sides.” It is not illegal for one country to bug another, according to The Guardian.

Asked for the UK’s help in identifying the source, Patino said Ecuadorean authorities “have reason to believe that the bugging was carried out by the company, the Surveillance Group Limited…one of the biggest private investigation and undercover surveillance companies in the United Kingdom.”