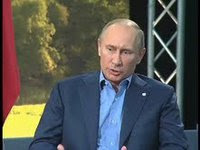 Not so fast Mr. Hope and Change. Haven't you heard? There's a new Sheriff in town in the Middle East.


President Putin reminded Barry that he's in charge. He already reminded Netanyahu recently after Israel fired into Damascus in early May. Afterward, Bibi sang a different tune. Putin's talent as a Judo expert is always useful in these situations. When Obama was continually arming Syrian rebels; declaring no fly zones and moving his Marines into Jordan Putin took quick action. Obama sang a different tune as well and even said, "and finally we compared notes on President Putin's expertise in Judo and my declining skills in basketball". The following video is in English and Russian:

The weak eyed Obama went on further to say, "And we both agree as you get older it takes more time to recover. "  He unbelievably even talked about the removal of the Jackson-Vanik Act. Obama nervously looked over his notes as Putin spoke clearly from his memory and intelligence. At meetings end Obama then went on to try and slap a handshake. It was met with President Putin's stone hand which withered Obama's smile away. Putin's firm grip declared who's top dog in this world.

Obama got the message. Russia has a naval base in Tartus and Russia's fleet is continually growing in the Mediterranean.  I'm sure all the loose change and hope fell out of Mr. Hope and Change during one of Putin's judo throws. Obama has now become aware of Putin's arms race. While Obama was having his many expensive vacations Putin had no choice but to increase military spending to halt US aggression. A Russian military having already an edge over the US as seen in this video.

The US is broke and Russia is the world's largest oil producer with a growing economy. Russia is not backing down and they have China to back them up. Who will back the US? Tiny Britain? Americans are turning gay and Russian men are looking more like the Klitschko brothers. The US is the modern day Sodom and Gomorrah while Christianity triumphs in Russia. No ACLU in Russia suing Christians to be sure.  The largest country in the world shows only contempt at the US Bomb & Missile Diplomacy.

The western media will warp the truth as usual. They will not show the entire video of Putin and Obama fearing that Americans will see things as they are and wise up. No mention of Christianity under attack in the Middle East and North Africa. Loud music and commanding voices will tell American citizens what to think and who to hate as they become mesmerized by their idiot boxes. Little is mentioned of Christians or priests murdered in Syria or the Christian Bishops that were kidnapped. Again the western cry is here reiterated, "What difference does it make! Assad must go!" Amerikan Demonocracy foaming at the mouth rabid with hate.

Standing firmly against these maniacs is Putin with Christian Russia solidly behind him. There has been finger pointing between the West and Russia but the political rhetoric is ignored by President Vladimir Putin as he calmly directs stability in the Middle East. Obama said, "By working together we... also help lead the world to a better place." We know your record Obama and it stinks of death. The only leading going on is Vladimir leading you by the nose. Putin made sure there will be a follow up to this meeting in Geneva. Lest O'bomber forgets.