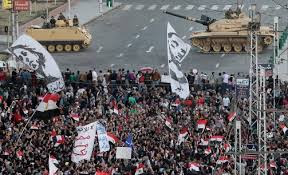 An adviser to Egyptian President Mohammed Morsi said Wednesday that a military coup was underway, that tanks were on the move outside Cairo and that communication with the president had been cut off.


As a military deadline came and went for Morsi to step aside, the army took control of state television, and boisterous crowds opposed to the president cheered, danced and set off fireworks in Tahrir Square. Pro-Morsi forces rallied elsewhere in the Egyptian capital.
The president’s whereabouts were not clear. The Morsi adviser, Jihad Haddad, told NBC News that he could not confirm or deny whether Morsi had moved from Republican Guard headquarters. It was not clear whether the military had ordered the Republican Guard to keep him there. 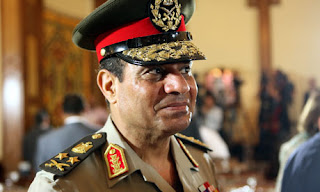 Representatives of the Muslim Brotherhood, which supports Morsi, said that some of its leaders had been rounded up and arrested.
Earlier in the day, both the president and the military had sworn a fight to the death. The military leader, Gen. Abdel Fattah al-Sisi, said it would be an honor to die rather than subject the Egyptian people to threats or terror.
In something of a call to arms, the military posted on Facebook: “We swear to God to sacrifice with our blood for Egypt and its people against any terrorist, extremist or ignoramus. Long live Egypt and its proud people.”

The government said at least 16 people had been killed and about 200 injured in clashes with security forces at Cairo University. 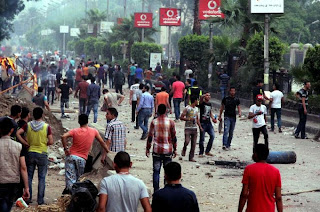 Egypt elected Morsi one year ago after throwing out Hosni Mubarak, the autocrat who led the country for three decades. But Egyptians have been frustrated by a weak economy, poor services and what they see as a power grab by the Morsi government.

The military was believed to have given Morsi until 5 p.m. local time, or 11 a.m. ET, to meet the demands of the protesters. The precise time was not clear. The ultimatum, issued Monday, has been denounced by supporters of Morsi as a military coup.
Hours ahead of the deadline, civilian political leaders were summoned to meet with the top generals. Those civilian leaders included Mohamed ElBaradei, the former head of the U.N. nuclear weapons agency and a critic of Morsi.
The Associated Press reported that a leading Muslim cleric and the head of Egypt’s Coptic Christians were also at the meeting. 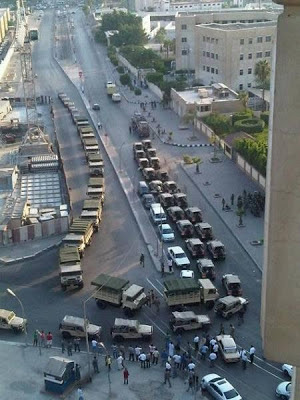 Sources told NBC News that the army had control of state television. Non-essential staff were told to go home early, and Reuters reported that the building was being guarded by armored vehicles. The Associated Press reported that military officers were monitoring broadcasts.
There were other signs that support for Morsi was slipping, even among sympathizers. A senior member of a hardline Islamist party allied with the president told Reuters that the party was trying to broker a peaceful transfer of power to avoid bloodshed.

“We find ourselves faced with the necessity of convincing the president to accept a referendum on early presidential elections,” Tarek al-Zumar of Gamaa Islamiya said in a telephone interview. “This is what we hope will be reached in the next few hours.”

The Obama administration and the United Nations have encouraged Morsi to listen to his people. President Barack Obama called Morsi on Monday and said the United States is committed to democracy and does not support any single person or group.
Pentagon officials said Defense Secretary Chuck Hagel had called his Egyptian counterpart. Spokesman George Little called the situation in Egypt a crisis and added the hope that “this period of tension can be resolved in a peaceful manner and violence can be avoided.”
Tamarod, a protest movement, called for supporters to rally at the headquarters of the Republican Guard, where Morsi was believed to be staying.

The opposition Dustour Party, whose name means Constitution, said Morsi was leading the country toward violence. It asked the army to protect the people “after Morsi lost his mind and incited bloodshed of Egyptians.”
The military has said it will impose its own “road map” for the future if Morsi does not meet the protesters’ demands.

In his speech, which was loud and passionate, Morsi blamed loyalists of Mubarak, his predecessor, for fighting against democracy and challenging his leadership through the current wave of protests.

He asked Egyptians not to confront the military or use violence against its forces, the police or the interior ministry. Earlier in the day, he had demanded that the armed forces withdraw their ultimatum.

The Muslim Brotherhood, backing Morsi, called for counter-demonstrations, and a pro-Morsi rally in a Cairo suburb appeared to attract about 100,000 people, journalists for Reuters said.
The U.S. Embassy warned Americans in Egypt to avoid large gatherings and monitor local news.

“Even demonstrations or events intended to be peaceful can turn confrontational and possibly escalate into violence,” it said, adding the embassy was closed.
The crisis could have a significant effect on the global economy. The benchmark price of crude oil for delivery in August rose by $2.22 to $101.82 a barrel in electronic trading on the New York Mercantile Exchange, the highest since early May last year.

Egypt’s control of the Suez Canal — one of the world's busiest shipping lanes, which links the Mediterranean with the Red Sea — gives it a crucial role in maintaining global energy supplies.

Egypt is undergoing a full-scale military coup. President Mohamed Morsi has been stripped of his power by the Egyptian army and the constitution has been suspended, General Abdel Fattah el-Sisi said in a statement. Egypt’s chief justice of the constitutional court will become the interim president.

“President Mohammad Mursi has failed to meet the demands of the Egyptian people,” Abdel Fattah al-Sissi said in a televised address to the nation.

He said that the Islamist-drafted constitution will be suspended and early presidential and parliamentary elections will be held, adding that a technocrat cabinet will be appointed to run the country during a transition period, which he did not specify.

The military chief said there will be a committee tasked with reviewing the constitution.