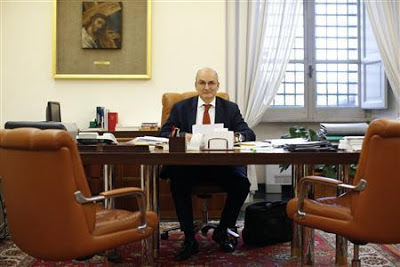 
Two top managers of the scandal-plagued Vatican bank resigned on Monday following the arrest of a high-ranking cleric with close ties to the financial institution, in the latest of a string of embarrassments for the Holy See.


Director Paolo Cipriani and deputy-director Massimo Tulli stepped down three days after the Vatican was rocked by the arrest of Monsignor Nunzio Scarano, who is accused of plotting with two other people to smuggle 20 million euros into Italy from Switzerland.

Ernst von Freyberg, a German who earlier this year became president of the bank, officially known as the Institute for Works of Religion (IOR), will assume the role of bank director until a permanent replacement is appointed.

The bank has also established a new position of chief risk officer who will be charged with improving compliance with financial regulations at a bank which has long been a byword for secrecy and lack of transparency.

Scarano, 61, who worked as a senior accountant in the Vatican's financial administration, was arrested along with an Italian secret service agent and a financial intermediary.

According to transcripts from a judge's report, Scarano, who is under two separate investigations by Italian magistrates in Rome and Milan, mentioned the director in phone conversations tapped by police investigators.

The judge's report, obtained by Reuters, says Scarano controlled vast amounts of money and felt he could act with impunity because of his connections to the Vatican bank.

Only last Wednesday, two days before the arrests, Pope Francis set up a commission of inquiry into the Vatican bank, which has been hit by a number of scandals in the past decades.

Scarano was for years a senior accountant for a Vatican department known as APSA, whose official title is the Administration of the Patrimony of the Apostolic See.

Magistrates have said there is no indication so far that the Vatican bank was directly involved in the attempt to bring the money into Italy, but that the investigation was continuing and more searches were under way.

Scarano was suspended from his duties several weeks ago when he was placed under investigation by magistrates in Salerno.

In that investigation, his lawyer Silverio Sica said wealthy friends had donated money to Scarano in order for him to build a home for the terminally ill.

According to Sica, his client wanted to use that money to pay off his mortgage so he could sell a property in Salerno and use the proceeds to build the care home.

Scarano has been accused of taking 560,000 euros in cash out of his account in the Vatican bank and giving various amounts to friends who gave him checks in exchange, apparently in a bid to cover his tracks. He then deposited the checks into an Italian bank account to pay off the mortgage.

The case against Scarano came as an embarrassment to Francis, who, since his election in March, has pointedly eschewed many of the trappings of office and sought to stress the importance of a simple life of devotion.

The IOR, tarnished by accusations of failing to meet international transparency standards intended to combat money laundering and tax evasion, is trying to clean up its image after a long history of scandals.

Its most notorious incident came in 1982 when it was enmeshed in the bankruptcy of Italy's Banco Ambrosiano, whose chairman Roberto Calvi was found hanging from London's Blackfriars Bridge.

In 2010, Rome magistrates investigating money laundering froze 23 million euros ($33 million) held by the IOR in an Italian bank. The IOR said it was transferring its own funds between accounts in Italy and Germany. The money was released in June 2011 but the investigation continues.

The European anti-money laundering committee, Moneyval, said in a July report that the IOR still had to enact more reforms in order to meet international standards against money laundering.

The Vatican is due to give Moneyval a progress report this year.