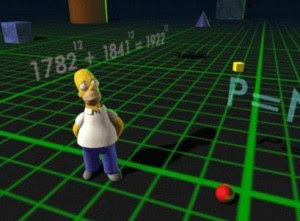 Humanities understanding about the nature of our reality seems to be increasing exponentially.


For quite a while now, we’ve been contemplating the anomalies within consciousness, quantum physics and more that are helping to further our understanding about our world and worlds beyond our world. The search for Earth like planets and life beyond our planet has been going on for quite some time now. With the concept of intelligent extraterrestrial life on the minds of many, more concepts within science come into play. Now, we are contemplating the existence of multiple universes, as well as multiple dimensions of reality. We are not only on the verge of confirming intelligent extraterrestrial life and extraterrestrial worlds, we could be on the verge of confirming  extra-dimensional worlds, and extra dimensional life, if we haven’t already.

Flatland is a novel written by Edwin Abbot in 1884. It is the story about a two-dimensional world referred to as Flatland which is occupied by geometric figures. One day this world is visited by a three dimensional object (a sphere) to introduce the idea of a third dimension to a square, in hopes of educating the inhabitants of Flatland (the square) of the third dimensional reality. After the two dimensional beings are open to the idea of new dimensions, the sphere tries to convince them of the existence of a fourth, fifth and sixth dimension. The two dimensional objects are offended, and filled with fear. Incapable of comprehending other dimensions, they are returned to the comfort of their known Flatland.

Below is a great depiction of Flatland and dimensions by Dr Quantum, from the film “What The Bleep Do We know”. You can view the entire film here. But the clip relevant to this article is below.


As you can see in the 2nd dimensional world, there is only left, right, forward and backwards, but no up and down. Two dimensional objects would be flat, and would have no concept of three dimensional objects like a sphere. If a third dimensional being were to enter into flatland (2nd dimension), its true shape would not appear, only a small portion of it, a cross section of it, a misrepresentation of the real shape. Similarly, we exist as third dimensional beings, and would not be able to perceive what a fourth dimensional being would look like. This would mean that if a being from the 4th dimension did appear, its true shape from that dimension would most likely be misrepresented. As doctor quantum illustrates,if life in higher dimensions exists, they can see things in a way that we can’t yet. They have access to a much different perspective than we do, and could easily manipulate, play around with our reality  until we became aware of it. In our case, 4th dimensional beings would be able to see things in a way that we can’t yet.

If we see only what we know, how does anyone ever see anything new? The unknown…how do we ever get out of our box? – Dr Quantum

Suppose a visiter from the 4th dimension decided to come down into our 3rd dimensional world, and spoke. We would only hear the voice, unable to see the being. Just like in the video above, the little flat circle could not see a physical depiction of the voice she heard from the third dimension. This is because that flat circle was limited to the 2nd dimensional perception of reality. There was no up. there was no down. Unless the being decided to make its presence known, it would not be perceived.  So what about the 4th dimension? As you saw with Dr Quantum and flatland, second dimensional objects were stuck in a specific space of reality, just like we are currently limited to our 3rd dimensional concept of reality. 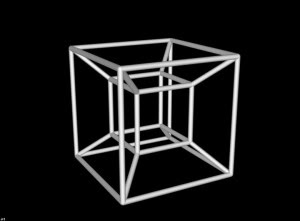 In flat land, it can be said that the reality which existed in that space was simply a square, not a cube, but a second dimensional  flat square. A square would be taken from a line segment, and moved at right angles to itself at equal length to form its shape. If we take that square and move it at an equal length at right angles to itself, we get a cube! To make it easier, simply imagine a cube that you would hold in your hand, that would be a 3 dimensional object. A second dimensional flat square could only go left, right, back and forth, it would lay flat in your hand. A cube would be able to go up down, left right, back and forth. Beings that live in the 3rd dimensional space of lets say a cube, would be ‘above’ the second dimensional flat square below it, just like you see in the picture to the right.

Here is a clip of Carl Sagan explaining it for those of you who are more audio/visual learners, like me!


Below is the trailer for the movie flatland 2 “Sphereland”. You can view the entire first film  here.


These are very interesting concepts of reality. How can we ever perceive the dimensions above us? If we are in the third dimension, how would we have any concept of the 4th, 5th, or 6th dimensions? As doctor quantum says, how do we ever get out of our box? The answer might lie within the realms of consciousness. Where does our current understanding of reality come from? Maybe the key is to become aware of something in order to unlock the doors to experiencing it. As we’ve moved through different stages of human history, new findings about the true nature of reality have become apparent. We knew the Earth was flat, we know the Earth is round, are we on the brink of another paradigm shift? Throughout all stages of human history, intellectual authorities have have suppressed scientific  discoveries that did not fit the current understanding of reality, have things really changed? Maybe multiple dimensions are already known about, and maybe we already have access to them in the black budget world?

We have the technology to take ET home. We already have the means to travel among the stars, but these technologies are locked up in black projects that it would take an act of God to ever get them out to benefit humanity. Anything you can imagine we already know how to do – Ben Rich, Former Head of Lockheed Skunk Works

With the recent UFO/extraterrestrial disclosure over the past few years, concepts such as this are at the forefront of humanities concern. Maybe if we collectively come together, and realize that we are nothing but infinite potentiality and loose the definitions and limitations we’ve placed upon ourselves, we will be able to expand our understanding about the nature of our reality and create something better for ourselves. Maybe we can shift ourselves from a 3rd dimensional level of consciousness to a 4th or 5th dimensional level of consciousness?  In order to further our understanding, we must come together and change the way we operate here on planet Earth. Our current reality is not resonating with many, we are out of sync with nature and many do not resonate with the repetitive robotic like lifestyle we have been programmed to follow, while the planet and those that reside upon it continue to suffer unnecessarily. You’ve felt it your entire life, something here needs to change.

Like I said extraterrestrial, extra dimensional, or both? I’ve used this clip a number of times. I just love his enthusiasm, he was a great man!