Jihadist bomb the holiest place for Buddhists in the world, combined senseless terrorattack of 9 explosions 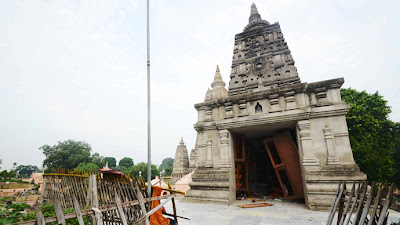 
A number of explosions have rocked the Mahabodhi temple complex, south of Gaya in northeastern India. The Buddhist pilgrimage site his home to a towering Buddha statue and a holy tree where Buddha is believed to have reached enlightenment.

"It is a terror attack," Union minister of state for home RPN Singh said about the blasts that took place between 5:30 and 5:58am.


Indian police reported eight blasts at the Bodh Gaya temple between 5:30 am and 6:00 am on Sunday morning. Four exploded inside the complex and 2 outside, but the temple, a UNESCO World Heritage Site, was untouched. A seventh bomb was found near the 24 meter tall Buddha and defused. Indian President Prenab Mukherjee condemned it as a ‘senseless act of violence’.

Two people, believed to be Tibetan monks according to local sources, were reportedly injured.

Security has been beefed up at major temples in the Jharkhand area.

“It’s disturbing that such an important temple site was attacked. This temple is an important site for the whole nation,” Bharatiya Janata Party (BJP) spokesperson Ravi Shankar Prasad said.

The site is sacred to Buddhists, who travel from all corners of the world to visit. It is where its believed Buddha reached enlightenment in 531 BC, a divine state of nirvana central to the practice of Buddhism. There is no damage to the ‘Buddha tree’, local police reported.

The Sri Lankan President, who often visits the popular tourist destination was ‘shocked and dismayed’ by the attack. 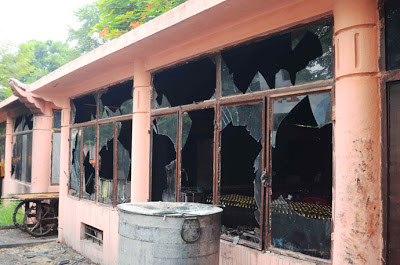 A National Security Guard (NSG) team  was dispatched to the area, as the explosions have raised the question of whether or not the attack was motivated by terrorism.

Investigators on site said the attack looked ‘sophisticated’ and the bombs were detonated with remote timers.

The NSG says the bombs were likely made from ammonium nitrate or potassium permanganate, both of which are readily available on the market and are commonly used in bomb making.

The incident could be linked to poor security and surveillance, and so far, no record has been obtained of the security tapes. 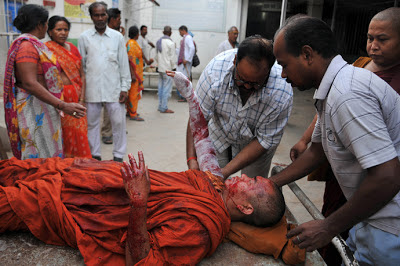 Experts from the Indian NSG will study the bomb residue in the coming days to discover how they were denominated.

“It’s very unfortunate, actually there should be no need for security in a religious place,” a Dalai Lama aide said in an interview with Times Now. “But this kind of incident in a religious place happening means that these places need to be secured. There is a lot of concern for tourists and visitors who come to Bodhgaya. Whoever carried out this will hopefully shun this kind of activity,” the aid said.

Bodh Gaya is the holiest site for the Buddhists world over. It was bombed early this morning in a series of Islamic terror attacks. Their most holy site. The Muslims prohibit the Jews from praying at their most holy site (the Temple Mount), not to mention their false religious claims to Jerusalem. The Muslims are converting one of the most important monuments of Christianity, the 6th-century Church of Hagia Sophia, into a mosque. Tens of thousands of Hindu temples have been destroyed by Muslims. 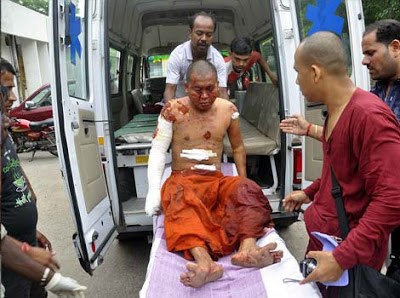 But Robert Spencer and I are banned from Britian because we discuss such things. Such is poison fruit of a world held hostage by savages.

Buddhists rarely finds themselves targets of violent attacks. There has been an increase in jihadist activity in Indian, Myanmar, Sri Lanka, and Bangladesh.

Violence in Myanmar has heated up in the last year, creating schisms with local Muslim leaders and Buddhists.

In July 2012, al-Qaeda linked Tehreek-e-Taliban Pakistan threatened to launch attacks against Buddhists in response to clashes between Muslims and Buddhists in Myanmar.